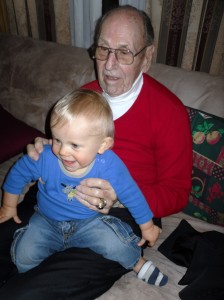 fumbles a bit with the word – it’s a bit chewy in his mouth – but he takes a big bite and releases it with a smile to his Great Grandpa: “Emil! Emil!”

The old man grins and nods and slides the German name smoothly back again across the dinner table, emphasizing the long ‘A’ sound of the first syllable: “Eh-meal! Eh-meal!”

For a moment, the young Emil – he is all of two – and the elder Emil – he is all of 96 – smile with delight at one another, captured by the magic of their very own shared name. It’s Father’s Day, and we’re stretching the generational celebration a bit, with a boy and his father’s-mother’s-father.

Long before we knew we would have a child, let alone a boy, my hubby and I settled on a name. We knew we’d name him William, but call him Liam, and that his middle name would be Emil. We wanted Liam to share a middle name with his Great Grandpa, a man dearly loved by both of us.

We lost Grandpa this month, peacefully in his sleep, after a long and active life that stayed active practically to the very end. Our little one will probably not carry his own memories of his Great Grandpa, but we will be sure he knows the man through our pictures, our videos, and especially our stories.

At Grandpa’s memorial, we looked at photographs of him as a young man, dapper in his slim suits and bow ties. Life was still unfolding for the man in those pictures: There was a world war to fight, a career to build, a long marriage to enjoy, children to raise. The young man would grow gray and stooped, but that youthful verve, the urge to see the world and to be seen by it, never faded. As recently as last year, the man boarded a cruise ship and visited Europe yet again, still eager to discover 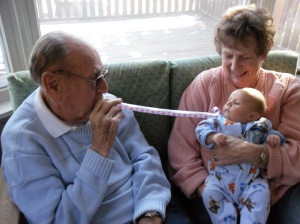 new places, to take pleasure in the sights and sounds of a foreign country. May we all be so lucky.

Wil and I have now reached the point in our lives where we are grandparent-orphans. While in college, he lost one grandfather and I lost both. Wil’s Grandma, Grandpa’s late wife, died while Wil was in law school. I lost one of mine while we lived in England, and our remaining grandmothers passed away these past two winters. The world revolves, new generations are born, but with each extinguished flame something, someone, irreplaceable is gone. They were loved. They are missed.

For a grandpa who entered my life once I was in my 20s, he did a wonderful job of making me feel welcome into his family. It was an unexpected blessing – a bonus really — to my relationship with Wil, that I should also gain another grandpa. He gave me a hint of what it would have been like to have my own grandfathers at my wedding or at my son’s baptism, marking another generation’s milestones. He was so very proud of Wil following him into the military – he retired from the Army reserves as a Lt. Col. – and he always wanted to know what I was working on as a writer. With Liam, he was playful and charming, and always willing to accept a squirmy baby, then toddler, into his lap for a cuddle and a joke.

The last time we talked was on my birthday, last month. He called to wish me a happy day and wanted to be sure I knew that my card and gift was on its way, safe in the hands of my mother-in-law, who I was going to see shortly. He didn’t want me to think he’d forgotten me.

Now, it’s my turn to not forget him. I know he will be remembered – by me and so many others – for years and years to come. Beyond the memories, time will eventually reveal which of his traits are carried on in his great-grandchildren. His sweet tooth? His sense of humor? His sense of style? Who knows? Maybe years from now my son will find himself face to face with a little one, instructing him in the fine points of saying “Emil!”, emphasis on the A.