The thermometer keeps topping out at more than 90 degrees lately, so my motivation to get out and walk around has been lacking. I’d feared rain for this first summer in Japan: We’re getting wet alright, but it’s just our own sweat.

To beat the heat, today’s adventure was by car. Driving here still makes me very (very, very) nervous, but I’m determined not to let fear get in my way. I mapped the route of three second-hand stores – what they call recycle shops here – and grabbed a friend, J, to make the loop around the base. The first shop I wanted to check out was easiest to get to out a gate on the other side of base, so we took the road across the flight line first.

After leaving the base, we made a couple of turns to get onto the road with the first store, which is called the Fussa Recycle Center. We drove along farmers’ fields green with crops before turning into the gate of a warehouse. Despite the closed sign out front, the shop was open. Inside, the foyer had shelves of slippers and little cubby lockers for us to place our shoes. We made the exchange and continued inside to view the furniture, dishes and knick-knacks. I’d hoped to find a bicycle but there weren’t any on view. Instead, we found wood cabinet after cabinet, many with small, narrow drawers and a nice selection of slim bookcases. I’m starting to get used to the scale of things here. Most living room chairs are low and compact. Kitchen tables – we’re hoping to find one for our kitchen – are shorter than we’re used to and have petite chairs to match. I’ve seen a number of mini-desks, rising up only to the height of just two or three drawers. You’d have to sit on the floor to use one. (Perhaps they do or maybe they’re meant to sit on top of another table?)

Through a back door, we spied a workman varnishing furniture, which explained why that smell was so strong when we entered. We didn’t make any purchases but I’d like to return with Wil on another day. On the way out, I spotted a small sign in English in the foyer that said bicycles are shown after 10 a.m. on Saturday. Maybe I’ll be able to find one after all!

Our next stop was a local branch of the second-hand chain called Hard Off. To get there, we followed a couple of roads out of the fields and back into civilization, joining the clogged traffic on a road that skims the edge of the base perimeter. Liam had a blast trying out the toys in several aisles and J and I enjoyed browsing through the racks of clothes. The store had a lot to sell – dishes, purses, luggage, small and large appliances, jewelry, baby gear, linens, etc. – and even though it had a few bikes for sale, they weren’t in the (lower) price range I’m aiming for. Outside, the vending machine was out of the bottle that appeared to be water — not sure why it was decorated with small images of vegetables — so instead, I got Liam a can of Minute Maid Aloe & White Grape juice. (Aloe?) Like any good mom, I tried it first and was surprised that it contained chunks of something chewy. Almost like small chunks of grapes, but more like soft candy. 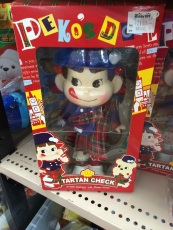 Aloe juice? Yum.
Onward. We found our third shop just down the street, tucked in behind an arcade and bowling alley. I found a large, nearly empty parking lot in back and took advantage of the space to try backing into a spot, something the locals all do here. First try! (Now, the trick will be to do it again sometime when there are cars on either side of me!) Inside, we found another large store filled with a wide variety of goods, including lots of those little cabinets, tables and couches. (J and I were both smitten with a lime green sofa.) No bicycles on view but J found and purchased a cute tunic blouse. 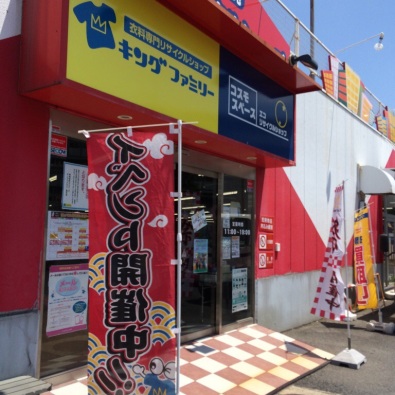 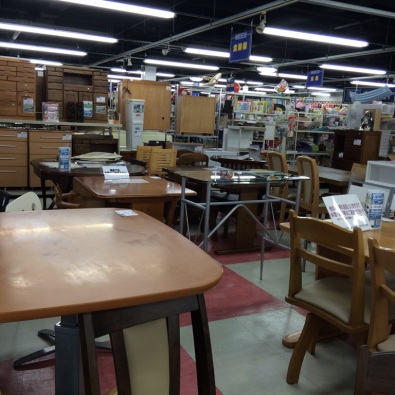 To pull back onto the road, I had to use a mirror mounted on a telephone pole to show me if cars were approaching from my right. The Japanese make clever use of these mirrors at intersections and driveways, mitigating the dangers of many blind corners. One more turn, and we were on route 16, the busy highway that borders my side of the base. In a few minutes, we were back on base, having completed almost an entire circle. Getting out there and driving, even in circles, is a good thing. (Sure beats spinning in circles inside our house, hiding from the heat!)