Once upon a time, there was a special place for petting guinea pigs and admiring zebras, where roosters crowed and monkeys frolicked, and even an old train engine opened its door to children for playing. Last Wednesday we found this place, in the form of a little zoo just a short drive away in the neighboring town of Hamura. My friend L. drove Liam and me there, along with her two small children.

We live now on the edge of one of the world’s largest cosmopolitan cities, yet we have not had trouble discovering sweet, almost folksy, places. In Ohio, we were fortunate to have two large, well-designed zoos within driving distance: the Columbus Zoo and the Cincinnati Zoo. Both were the kind of zoos that could take up an entire day of exploration, trekking from one giant animal habitat to another and taking in the educational shows, not to mention dining at one of the numerous food courts or restaurants. That’s not the case at the Hamura Zoo. We had no problem seeing the whole zoo in just a couple of hours, even while covering the territory with children ranging in age from 1 to 4. 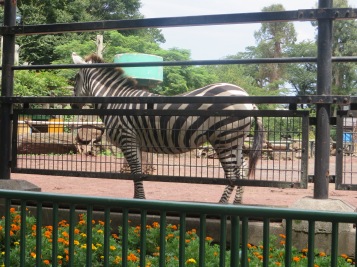 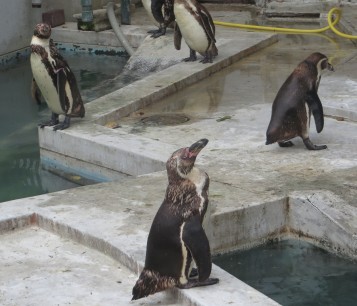 Part of the zoo’s sweetness stemmed from its fairy tale theme. There were panels painted throughout the park, illustrating children’s stories, as well as life-size sculptures of animals from the stories. Some I recognized, including the Bremen Town Musicians, but others were head scratchers: Do you know any kid stories involving both monkeys and crabs? There was a large play area of the mechanized-rides that are becoming very familiar to me in Japan, but it was preceded by a play ground consisting of pipes big enough for Liam to run through, with whimsically-painted exteriors featuring spotted mushrooms and the happiest of little animals. The kids also had fun clambering on and off of animal statues. So basic, yet so fun for the preschool crowd. 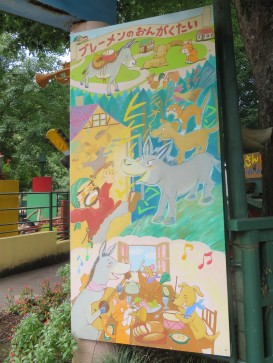 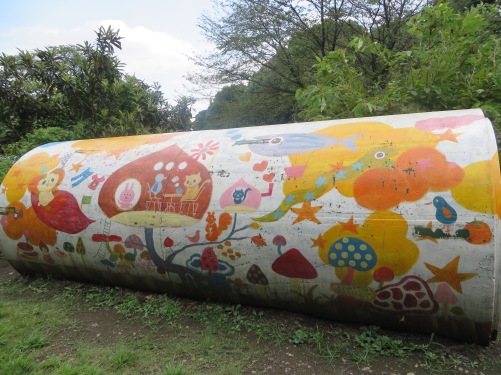 For lunch, we sat down in one of the small picnic areas – we chose one that didn’t smell of animal poop, a hazard of a zoo that is still rather old-fashioned in its animal-keeping practices — eating lunches that we’d packed. The only food for sale was ice cream. For drinks, we could have ordered beer from a kiosk or water and/or soft drinks from a vending machine, but we’d brought our own. (Water, not beer!) 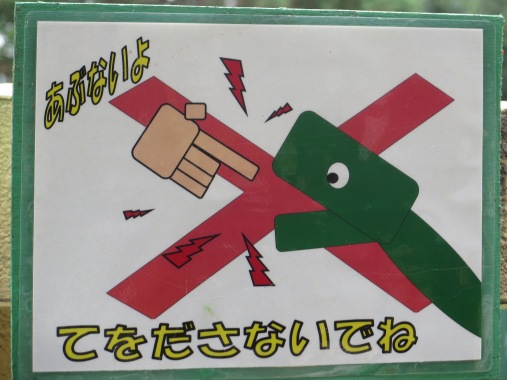 Watch out for turtle bites! 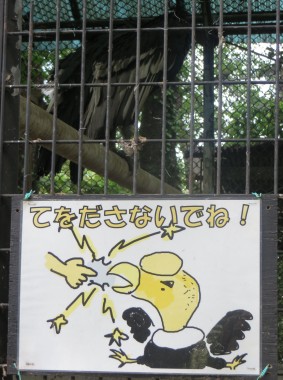 For some reason, the zoo also had a large, vintage train engine that kids were welcome to play in. Liam and his little buddy, O, had a fantastic time pulling levers and pretending to drive the train, while L. and I opted not to notice the oodles of rusty metal or the 10 foot drop out an open window. Our children survived. So did we. (More worrying was the 4-inch-long bug that buzzed in for a visit while the kids were playing.) 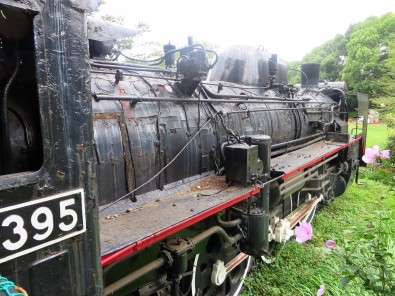 By 1 p.m., we’d visited the long row of caged chickens and roosters, greeted the giraffes and zebras, and admired the penguins on their concrete island. (The animals tended to be of the smaller variety…no lions, tigers or bears here!) One last bout of fun awaited us. On our way out, we passed a beautiful waterfall cascade, with a basin filled with iridescent fish. The boys didn’t have swim suits, so they didn’t get to try out the nearby mini-kiddy pool, but they were welcome to dunk their hands into a water trough where two water guns sat floating, handy tools for shooting water into the main pond. For an admission fee of only $3 for me and $.50 for Liam — tickets we purchased from a vending machine before handing them to a clerk in her booth — I felt like we got our money’s worth.

I stopped into the restroom on the way out, only to discover a crib in the vestibule outside the men’s and women’s restrooms. There wasn’t a baby in the crib but I can’t imagine feeling comfortable enough to leave my infant in there while I went through another door and into a stall. I can only assume it is safe – Japan has very low crime rates – but it was another stark reminder that I am living someplace very different from the U.S. If only we could all always feel so secure. (What a happy ending to a fairy tale that would be!)