This Saturday, we experienced the delights of another beautiful Japanese festival. All well and good, but the kindness given to us by strangers throughout the day was what really made the day special. We were guided by train, fed and watered, dressed and gifted with traditional Japanese garb, photographed, and encouraged to enjoy a parade, a festival and fireworks. Wil and Liam were even given a rare opportunity to carry a portable shrine.

A little back story. We learned about the event only the night before, when I saw it posted on a Facebook page for families here on base. C, an American teacher with Goover English School, shared their invitation to accompany foreigners, for free, to a samurai festival in Matsuda, a town of 12,000 about 90 minutes by train outside of Tokyo. Once there, we’d join other expats as guests of the town’s mayor. I jumped at the opportunity. We registered Friday night. By Saturday afternoon, we were on our way.

Our Japanese guide, T, met us at Shinjuku station in central Tokyo. For much of the next seven hours, she would be at our side, helping to explain the traditions, translating as we interacted with locals and playing tirelessly with Liam, who quickly formed a bond with her. We started our official visit with a light lunch at the Matsuda city hall, where the mayor greeted the 25 or so foreigners with a brief speech. After lunch, we were ushered into changing rooms. Wil was dressed in a two piece jinbei and I was able to pick out a lovely yukata – a summer kimono made out of cotton instead of silk. A posse of older Japanese ladies fussed over me, wrapping and tying – tightly! – me into the dress, speaking rapid fire Japanese. (For all I know, they were saying: Suck in your gut!) They were all very sweet.

Now that we were properly dressed, another young Japanese woman, M, led us through the city to the festival grounds. I now know first hand what it is like to walk in a tightly wrapped kimono. Let’s just say it’s designed for taking tiny steps. Adjusting my usual fast stride took some practice. There were a few moments where I feared I was about to fall forward onto my face.

At the festival, we watched groups of energetic dancers leap and twirl ecstatically across a stage. We weren’t hungry yet, but we eyed the food stalls lining the field with interest.

Soon it was time to walk back through the city to attend the samurai parade. We found T in the crowd and she helped to explain a bit about what was going on in front of us. We arrived in time to watch the mikoshi shrines get carried through the streets. Men – and a few women – labored to carry the heavy shrines, while team leaders shouted through megaphones to encourage them. (We witnessed mikoshi carrying when we visited Nagano in May.)

The parade paused for a while and as we waited for it to start back up again we took pictures.

Liam was soon the pet of a gang of half-a-dozen kids affiliated with one of the mikoshi carrying groups. They were all a little older but happily played games with him and a paper fan, allowing him to ‘stab’ them while they each took a turn getting wounded. He was in heaven. 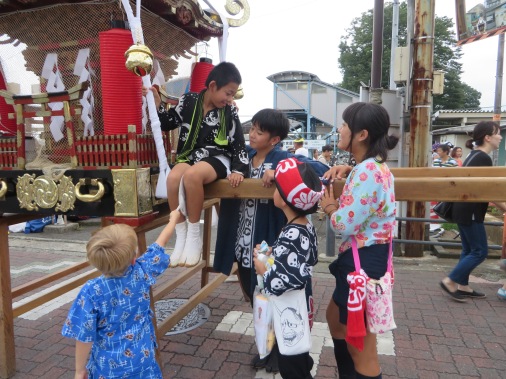 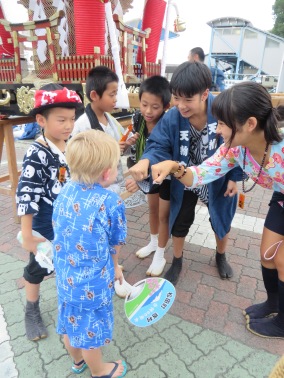 The parade began again, this time with samurai and lovely girls with geisha-style hair.

The mikoshi were picked up again:

A leader of one of the groups who had talked with us, though T’s translation, during the break decided that Wil and Liam should get to try it out. Suddenly, Wil was shouldering a pole with the other men.

Our new friend didn’t want to leave Liam out so several of the men hoisted him up to a high perch on the front of the mikoshi:

I learned later that it is impolite to ask how heavy the mikoshi are since they are, in essence, sacred vessels for carrying deities – I was told the answer in confidence – but suffice it to say that they are extremely heavy. Wil only carried it for a few minutes, but he has the black and blue marks on his shoulder to prove it. T told us he should feel quite honored. The teams work closely together and are very tight-knit communities. For him to be asked to join, even briefly, was an honor.

Here we are with the gentleman who recruited Wil and Liam:

We followed the parade as it wound its way back to the festival site at the river. 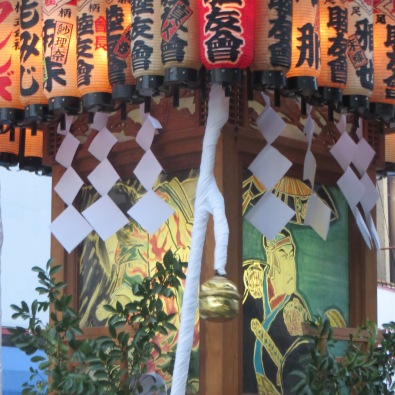 As we walked, we were asked for more pictures. This family was particularly excited to pose their little boys with Liam.

Then they decided we should ALL have a photo together. 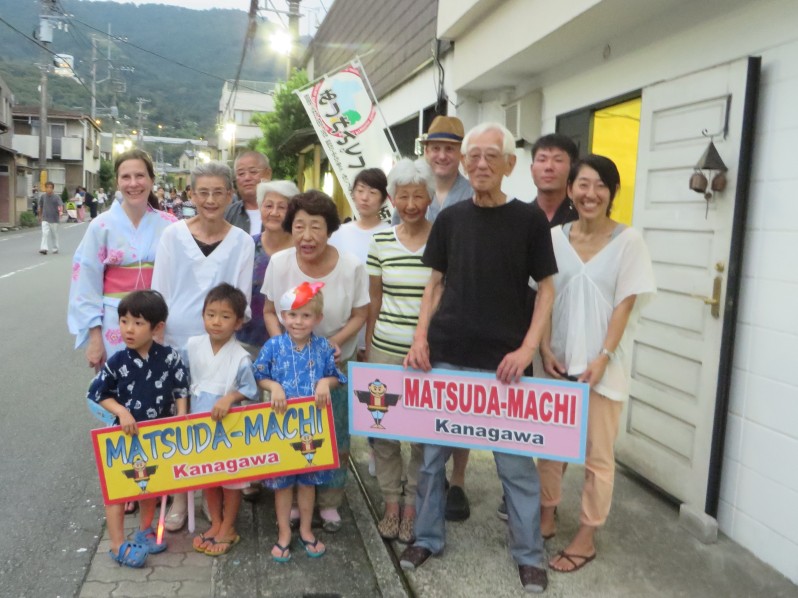 They were so kind and so very excited to see us in their town. The ladies complimented me on my yukata and they beamed indulgently at Liam.

It was dark by the time we arrived back at the river. We were drawn into a shoulder-to-shoulder crowd, our ears ringing with the rhythmic shouting of the mikoshi carriers. The orange lanterns glowed against a rippled blue sky to our left and the food stalls glimmered beautifully to our right.

T led us to a set of seats under a canopy to rest. Soon, though, a bon odori dance began and we joined in. A giant circle with at least 100 dancers formed in the middle of the field and we danced, one after another, performing a repetitive series of steps and arm motions. It was tougher to follow than it looks. The experienced dancers soon spread themselves throughout the circle to assist those of us who weren’t so, um, graceful. No photos: I was too busy dancing!

Wil went to stand in a very long line for takoyaki (octopus balls) and T, Liam and I found Liam’s friends again and they resumed playing. One of their mothers – fluent in English – patiently explained more details about the parade to me. She herself had carried the mikoshi for 10 years. At times we nearly had to shout over the sounds of a taiko drum group.

We’d had a great day, but there was one more big event: Fireworks! For 45 minutes, the sky erupted in brilliant pyrotechnics. Liam played energetically with a few young adults in our group while the rest of us chatted. I met C, from the base, for the first time and was able to thank her in person for posting the info on Facebook about the festival. When the fireworks ended, T and a few other Japanese volunteers guided us all the way back to the town rail station and bid us farewell. We hope to get together again sometime soon. 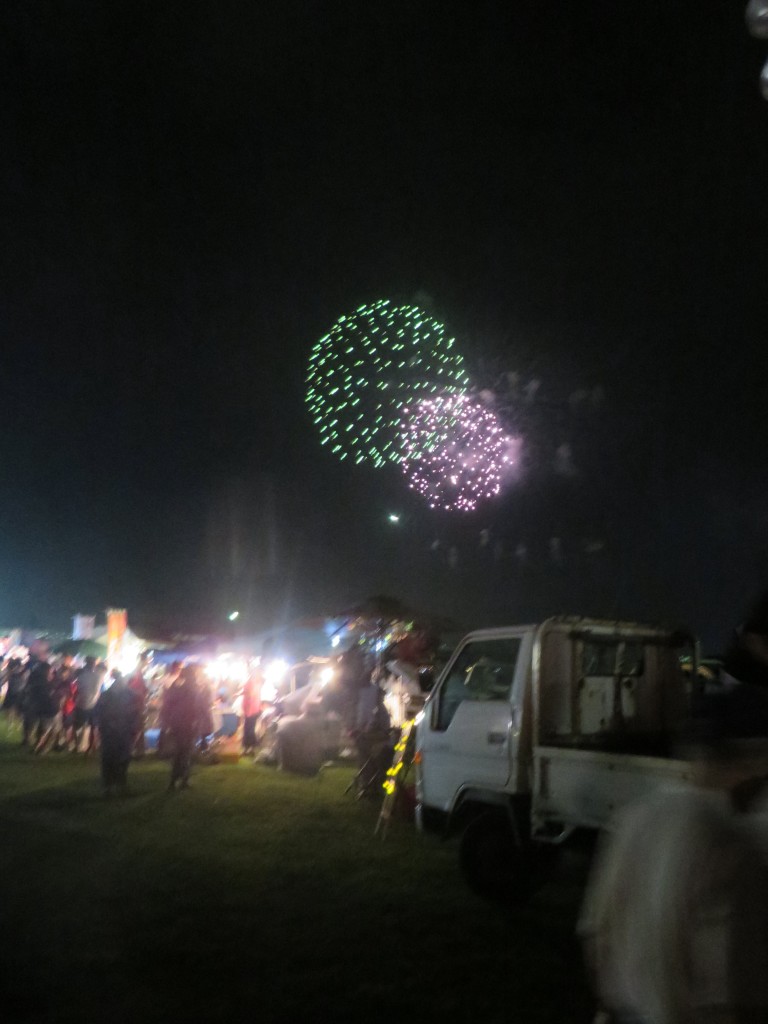 Our last big adventure of the day was navigating our two American families on and off of four trains, some of them incredibly crowded, before finally making it back to base a little after midnight. Liam was a trooper.

For us, it was an especially enjoyable day because we got to experience it alongside new Japanese friends. We always have a good time when we take the leap and explore Japan but it’s often a very muddled, confused leap. Beautiful, but murky. Having local people welcome us in heartily and take such pleasure in explaining and sharing their culture with us was truly a gift. Sometimes, the kindness of strangers makes all the difference between a good day … and a great one.