Back at the beginning of October, Wil and I celebrated our 10th wedding anniversary in Shinjuku, one of Tokyo’s more lively neighborhoods. We feel incredibly lucky to be able to step out our door and be in … Tokyo! No pricey flight needed for us to get to someplace special. We stayed in a hotel for the night, had dinner at an izakaya and treated ourselves to cocktails at the “Lost in Translation” bar in the Tokyo Park Hyatt.

Huge thanks go to my friend A and her family for watching Liam for the night so Wil and I could have our getaway. In a rare move, Wil even took the day off work, so we took the train into the city early enough to have lunch there. Just wandering around is great fun. Shinjuku is one of the busiest train stations in the world and the area that surrounds it is correspondingly busy. I’m still enough of a small town girl to love gazing up at skyscrapers and walking along busy city streets. 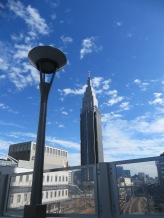 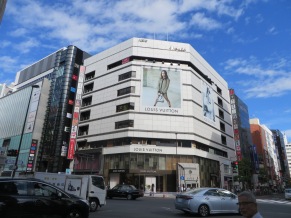 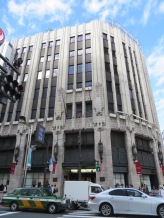 No matter where you are in Japan, there are shrines. We spent a calm half-hour strolling through one called Hanazono. Even in Shinjuku, the shrine grounds managed to feel both quiet and serene. 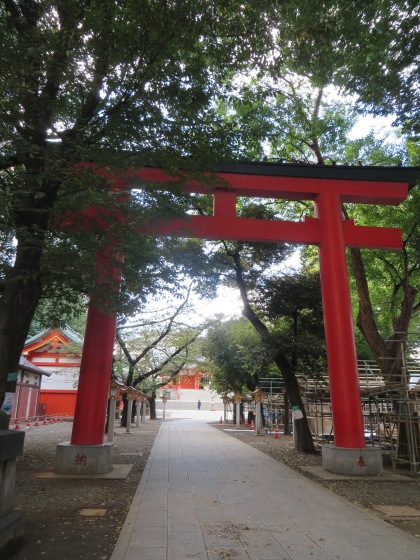 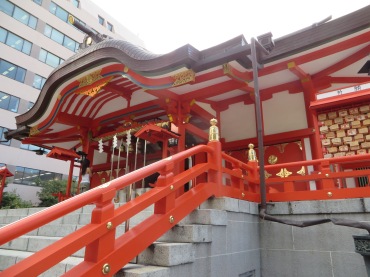 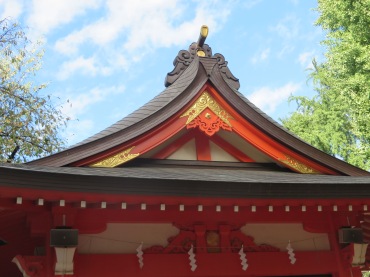 Shinjuku is famous for its nightlife. One area in particular, Golden Gai, stands out for the sheer number of bars crammed into just a few narrow streets. There are more than 200, one after the other, but there’s a catch: Most can only seat very few customers. We saw many that would be crowded if just five people showed up. I’d love to be able to share with you stories of Wil and I getting our drink on at these very Japanese establishments, but since it was maybe 2 in the afternoon, none of them were open. Even so, it was amusing to check out the exterior doors and signage and peek into the few available windows. 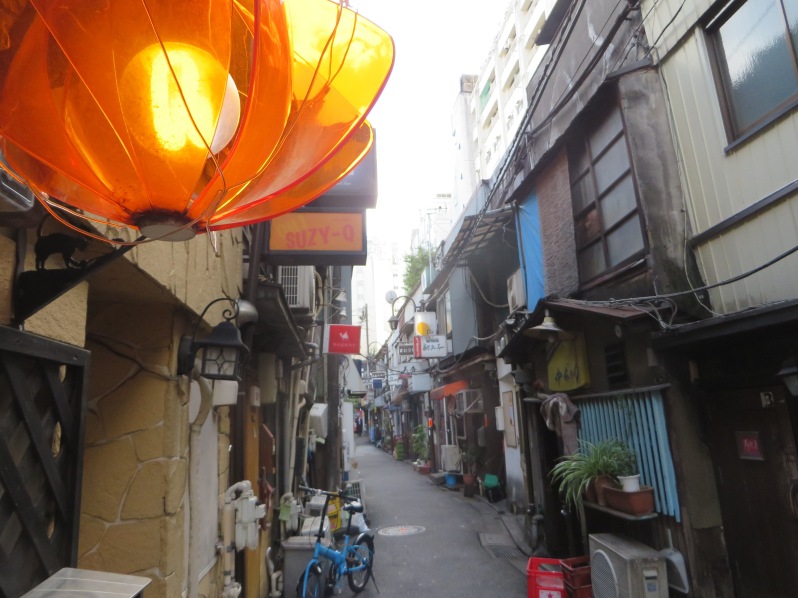 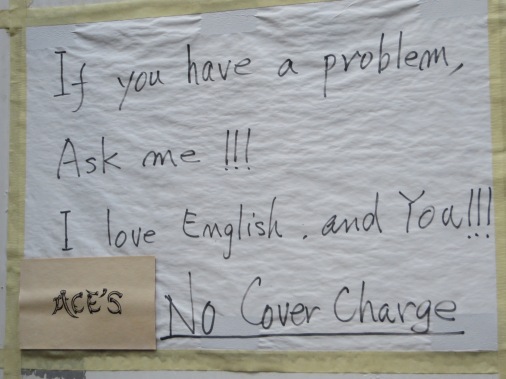 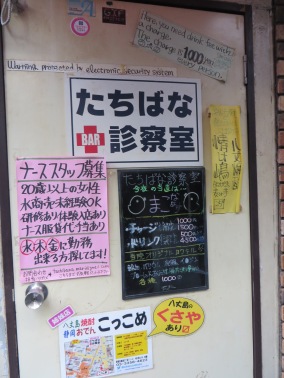 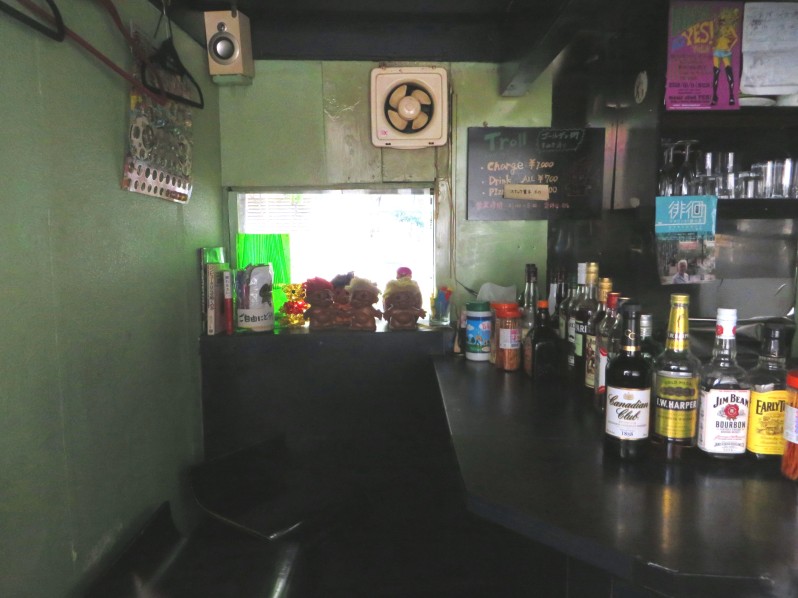 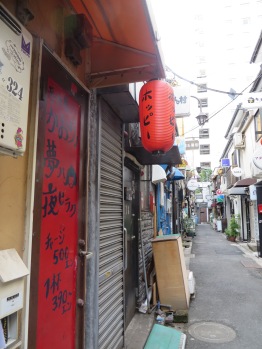 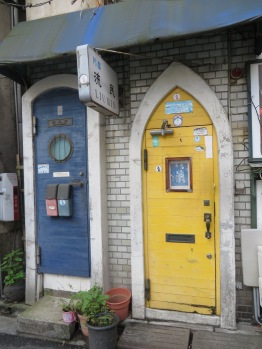 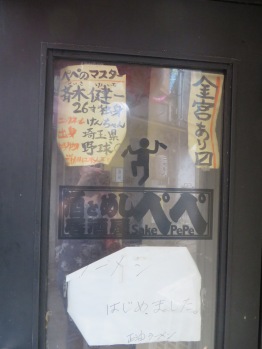 Looking at all those bars made us thirsty. At times like that, Wil misses the drink anytime culture of the UK. So naturally, we went in search of a British pub. This may be Tokyo, but you can almost always find a pint of Guinness if you look hard enough. (We found ours at Dubliners’ Irish Pub.) 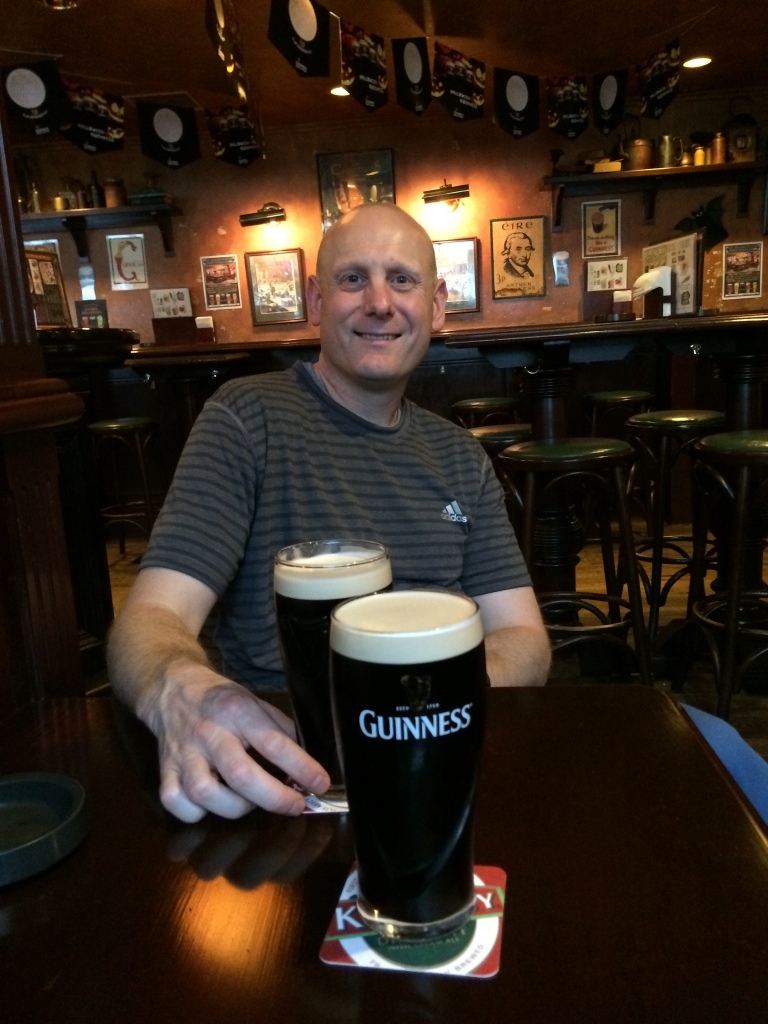 After an amusing search for the locker we’d left our luggage in at the train station (Did I mention that place is huge? Huge!) we checked into our hotel. We stayed at the APA Hotel Shinjuku Gyoenmae. This was our first experience with a non-military Tokyo hotel and it lived up to the city’s reputation for having tiny hotel rooms. Comfortable and clean but, wow, was it compact. That’s the whole room in the photo below. The bathroom sink and shower cleverly shared a faucet. 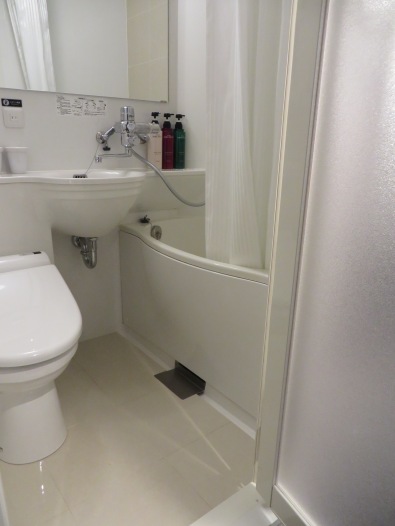 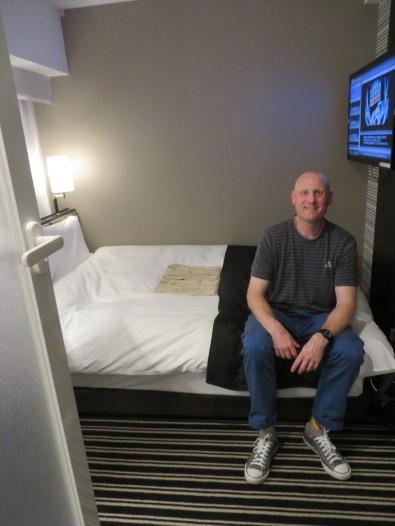 We dolled ourselves up for our big night in the city. Aren’t we cute? 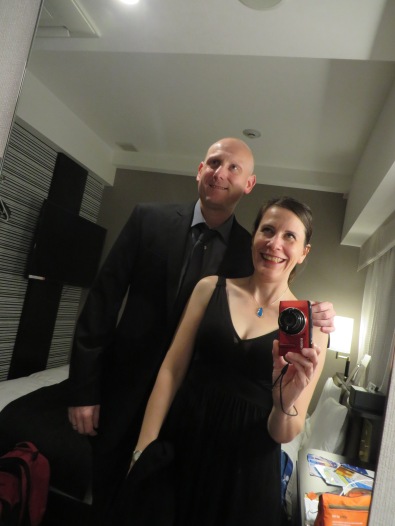 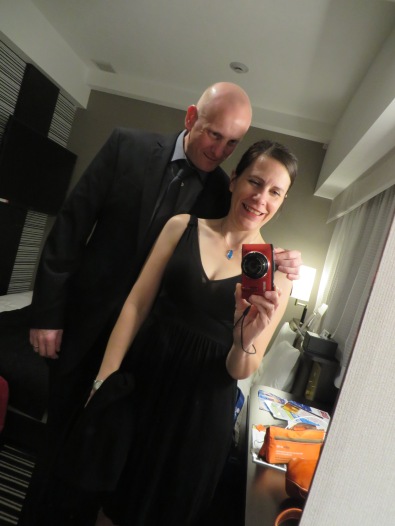 I’ve learned that it’s a good idea to scope out potential restaurants online before heading out for an evening. Although we enjoy the adventure of stumbling onto a great place to eat and have had some good experiences doing that, we’ve also had some very frustrating evenings trying to find some place, any place, to settle. For our anniversary, I wanted to be sure we had a destination in mind, in case we didn’t happen to see something else enticing on the way. I used Bento.com to find Tsukada Nojo. It’s a non-pretentious little izakaya-style restaurant–the cooking staff genially shouts at you when you enter–known for their chicken. We had a delicious meal that included several dishes we’d never tried before. The restaurant is located on a second floor and we enjoyed watching the crowds flow on the road beneath us. We washed the meal down with sake. We still feel pretty lost when it comes to ordering it but we liked the one we kind-of-randomly picked from the menu. 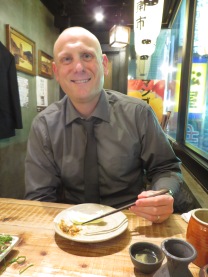 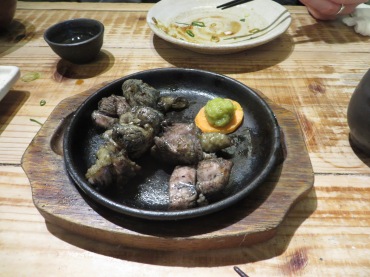 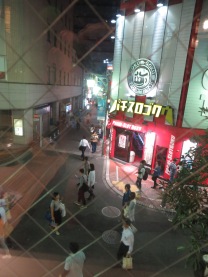 Our waitress didn’t know it was our anniversary but the staff must have guessed we were on a date. Check out the rice dish: 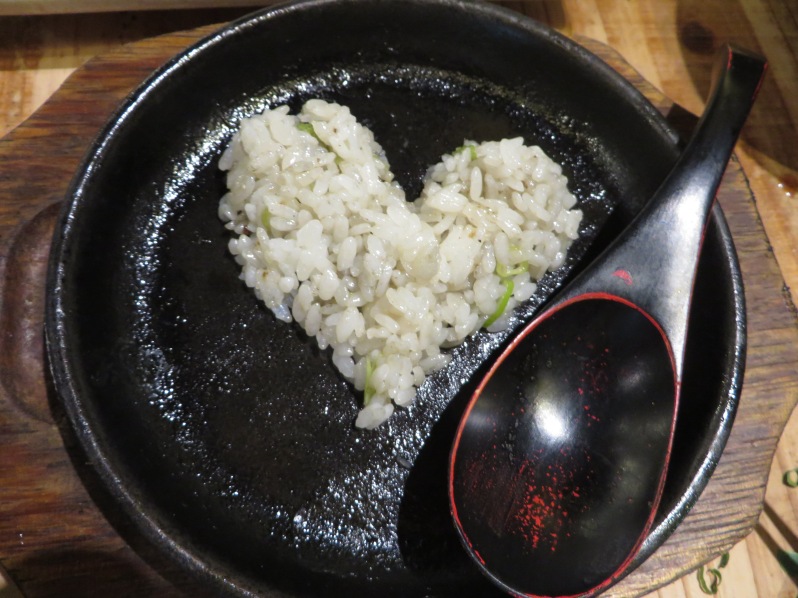 On to the main event. Drinking a cocktail in the Tokyo Park Hyatt’s New York Bar was one of my must-dos for Japan. I’m a fan of the movie Lost in Translation and Wil and I really wanted to see the bar where Bill Murray and Scarlett Johansson’s characters hung out. The bar didn’t disappoint. We felt quite posh slipping into seats overlooking a twinkling Tokyo. Smaller than I expected, the bar is swanky and dark, with tables arranged along the wall of windows, stained glass art suspended on high at either end and a grand piano prominently displayed. A jazz quartet serenaded us while I drank a Cosmopolitan and Wil sipped a Scotch. I tried not to be toooooo much of a tourist, so I don’t have a ton of photos to share. We just soaked in the atmosphere and enjoyed talking one-on-one. 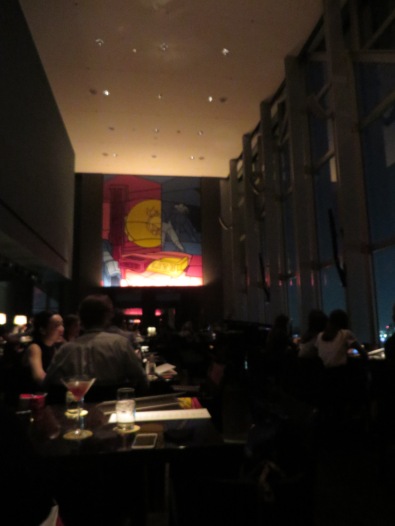 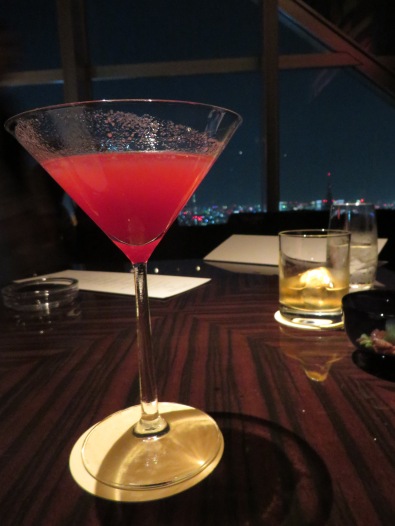 Wil’s job in the military is demanding and requires a lot of time away from Liam and me. While a special night out in Tokyo doesn’t necessarily make up for all the time we must spend apart, there are perks to the international nature of his job. We do our best to embrace the many good things this life brings to us. I never imagined when we met in Ohio that by our 10th wedding anniversary we would have lived on three continents. (And who knows where we’ll have resided by the time we hit our 20th?) It’s been an incredible experience seeing the world with my love. We’re happy together wherever we happen to live, but I’m not gonna lie: Tokyo is pretty sweet. 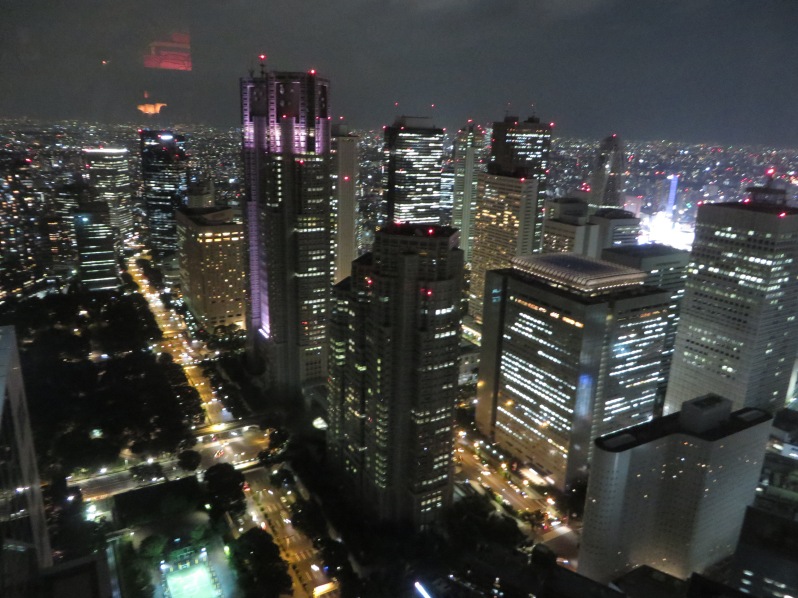