Japan is teaching me a lot, but one of the best things I’ve learned is the power of saying yes. Do I want to attend a festival? Yes. Do I want to try some new food? Yes. Would I like to try on a kimono? Yes. Make an origami rose, play a round of bingo or try my hand at calligraphy? Yes, yes and yes!

On Sunday, Liam and I attended a small cross-cultural festival inside a community center in a nearby town, Higashiyamato City. An American friend sent me an invite to the free event via Facebook. About a dozen of us carpooled from base for the roughly 25-minute drive to the three-hour festival. I’d initially hesitated to accept the invite –I didn’t know many of the people going and wasn’t quite sure what I’d be getting Liam and I into—but decided the prospect of an afternoon enjoying Japanese culture was too good to pass up. That, and I was charmed by the description when I looked the event up on Google: “Let’s spend happy time together while doing chattering, game! All Nationalities and Citizens are greatly welcome to the joyous event.” Who in their right mind would turn down such an opportunity?

The festival was held in a large room, with a stage at one end. The walls were decorated with posters of ukiyo-e prints, international flags were festooned from the ceiling and origami bouquets dotted the front of the stage. Folding chairs were set up in the middle to watch performances, but tables along the walls offered activities and food. Liam immediately found a toy table in the back, complete with origami spinners, Japanese kendama toys, and empty yogurt (?) containers for stacking. Several older Japanese men attempted to teach him how to use the Kendama – you try to toss a ball on a string into the attached cup, but he was more interested in building castles and towers with the yogurt containers.

Other little boys soon joined him and I was able to turn my attention to the stage. We were treated to several performances.

There were Thai dancers, who charmed with their sweet graceful steps: 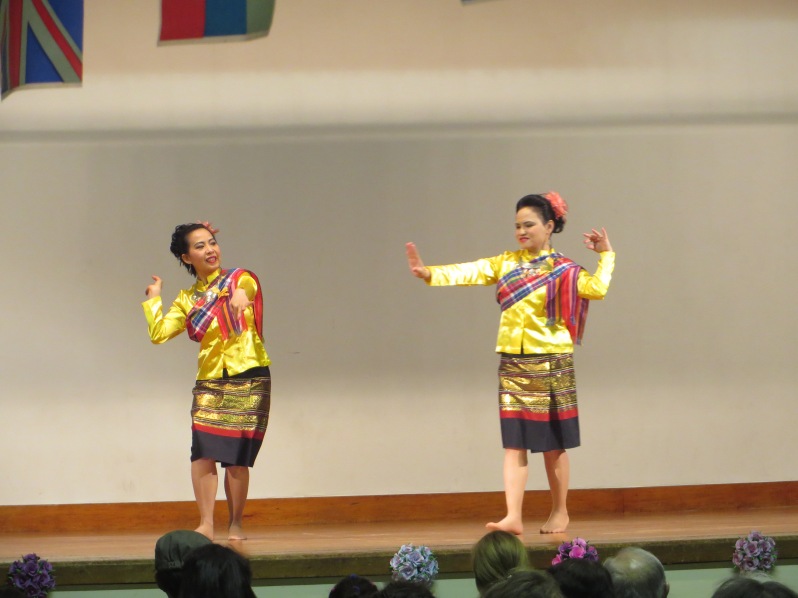 And one of my Japanese favorites, Nankin Tamasudare. The term can translate to either flower or a “wondrous woven screen.” Wondrous indeed. Poetry is recited in a cheery cadence while they manipulate the sticks into various shapes with flicks of their wrists.

And what self-respecting Japanese festival wouldn’t have drums. A small troupe, which included some surprisingly small children, took the stage and thumped energetically on taiko drums as well as some small drums. 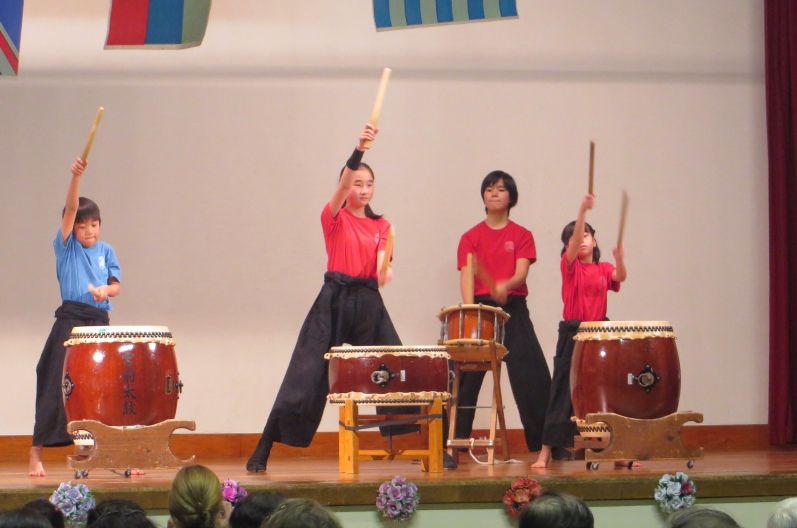 By this point, I’d had a delicious snack of a rice ball and mango and had been introduced to several of the Japanese attendees who could speak English. After the performances, we were encouraged to stop by various booths to try out the tasks. At the calligraphy booth, I was able to paint my name, Susan, in kanji using bold, black strokes. I was able to do so because the calligrapher stood behind me and guided my hand carefully through the strokes. I learned that the latter part of my name means “mountain.” The ladies present giggled when I referred to myself as a mountain.

Liam was eager to try origami so we ventured to the other side of the room where seats were conjured up for us at the crowded table. The instructor’s English was minimal but she and the other women at the table were incredibly kind and fussed earnestly over finding a project that Liam’s little hands could handle. They settled on a frog. I made a rose and a little square vase to rest it in. Just as with the kanji, when I say ‘I made’ I mean the lovely instructor guided me through most every fold and crease.

While we worked on our origami, the crowd was invited to join in Bon Odori, a large circle dance that gets performed at festivals. We didn’t participate this time but enjoyed watching as a good chunk of the crowd formed a circle the size of the gym and danced in unison to music blasted from the speakers. The steps and arm movements are simple and repetitive, ensuring that the very young and the very old can participate. What I love watching, though, are the faces of those who dance. My poor photos here do not do it justice — remember I was busy folding and creasing a rose — but I love the smiles that bloom on the dancer’s faces, either from memories of past festivals or maybe just the pleasure of sharing a moment with all the others in the circle. 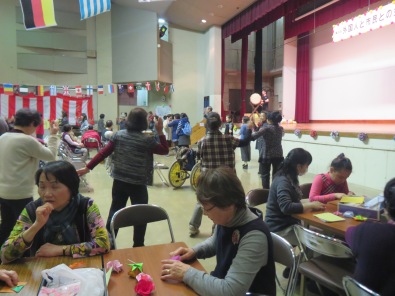 When the dance had ended, my new Japanese friend, who had been translating for us, asked if I’d like to go try on a kimono. My answer was, of course: Yes!

We crossed back through the crowded hall to a table with kimono and yukata, the lightweight summer version. I removed my shoes and stepped onto a tatami mat. As my translator was quick to point out, the woman dressing me was a ‘teacher of teachers’ for kimono dressing. She ably draped a kimono over my jeans and sweater and began the process of squeezing me into it with a series of increasingly tighter ties. Lots of photos were taken. 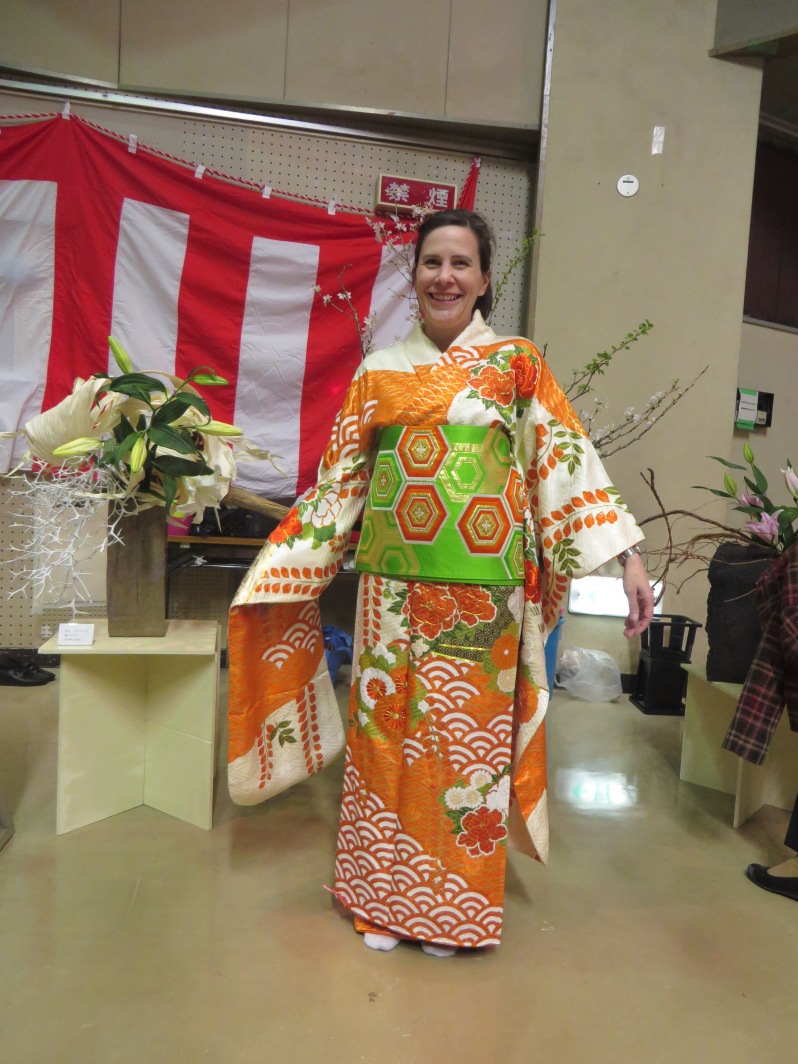 Would I like to try on a yukata? Yes! 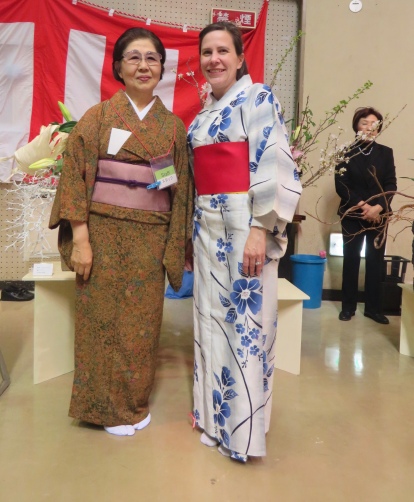 Next on the agenda was bingo. The game lasted a long time, long enough for all the players to get to select a prize from the table up front. I can’t remember the last time I played bingo, but it’s something Liam has done at school recently, so he was particularly keen to play. He selected a panda as his prize.

Our afternoon concluded with a group photo of everyone still there. There were five or six rows of us, spanning the length of the stage. It made me feel a little like I’d just participated in a family reunion of sorts. We were urged by many of our Japanese hosts to return again next year. They ensured that we left with many, many, many mementos of the day. We were gifted with several bingo prizes from new acquaintances and an assortment of origami crafts and bookmarks. I was given a red and black fan in a gift box from the festival organisers. Liam was handed five or six balloons that children had been playing with as well as several of the toys from the children’s table. A woman I had chatted with earlier came up and gave Liam a colorful origami ball. We were even handed one of the origami bouquets from the front of the stage. I couldn’t say “arigatou gozaimasu” enough. There was so much that someone hunted down a bag for me to put it all into. Liam, grinning, kept asking me: “Why are they giving us so much, Mama?”

Yet again, we were touched by the kindness and generosity of so many strangers. As we were leaving, one of my new friends wanted to know if Liam and I had enjoyed the festival? Yes, yes we did!