Palaces, markets, towers and mountains: We saw them all for a whirlwind trip to Seoul, Korea, earlier this month. This wasn’t an in-depth trip. We were the kind of tourists who arrived late on a Saturday and left early on a Tuesday morning, but at least we made the most of the two days in between. Seoul is a beautiful city with a rich history and I’m glad we’ve at least had a brief introduction to its charms.

We stayed in the Itaewon neighborhood. As a military family, we are eligible to stay in a hotel on Yongsan Garrison, a U.S. army post in the heart of Seoul. It may sound a bit grim, but in reality, Dragon Hill Lodge is an impressive hotel with numerous restaurants and shops available to military guests and their families. It gave us an inexpensive, central, place to stay. Here’s the view from our 9th floor room:

For day one, we opted to take the Downtown Palace Tour on the  Seoul City Bus,  a hop-on, hop-off coach with 22 stops. After boarding in Itaewon, on a street filled with funky looking shops hawking their wares in English, we opted to disembark first at the top of Namsan mountain. There are wooded pathways from the bottom of the 860-ft peak but, as I mentioned, this was a whirlwind trip, so we cheated and let the bus whisk us to the top. We were treated to panoramic views of the city: 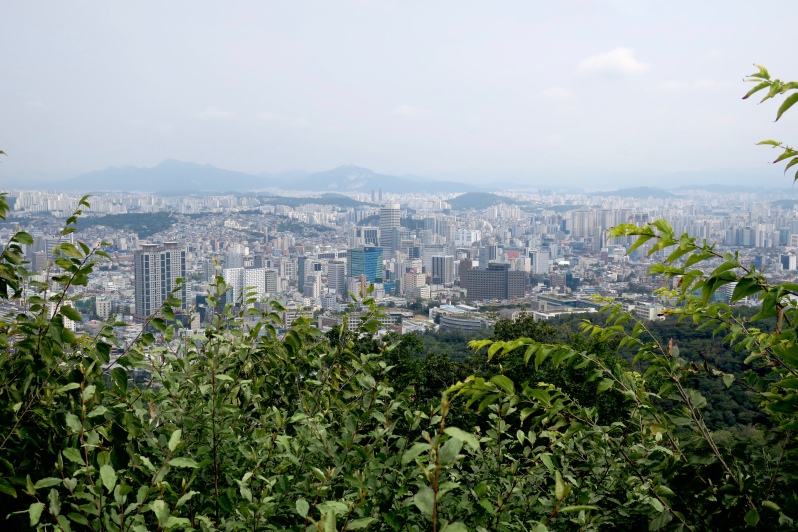 The N Seoul Tower perches at the top of the mountain like a giant needle. We didn’t go up to the observation deck but it was fun seeing it. You can see its base behind the friendly Haechi who greeted us. 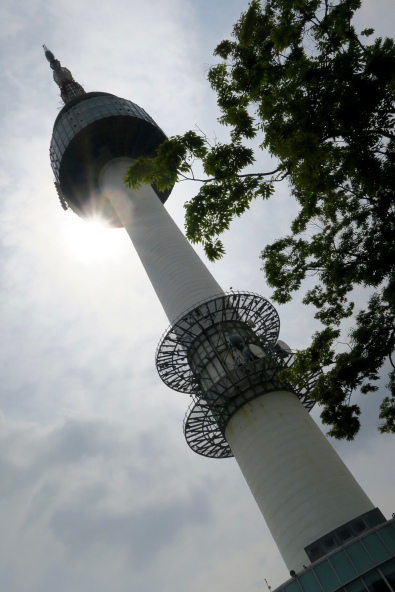 The area at the base of the tower is used as a meeting point for lovers, who can leave a lock behind as a memento. They were oddly beautiful when viewed up close, a potpourri of metal, color and hearts. 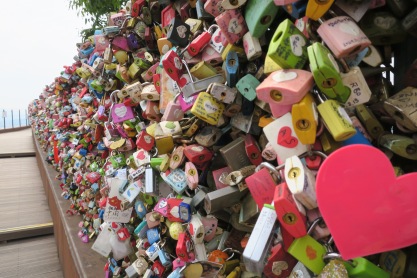 Next, we took the bus to Dongdaemun, a neighborhood named for the “Great East Gate” to the city which was originally built in 1398. (The current one is from 1869.) 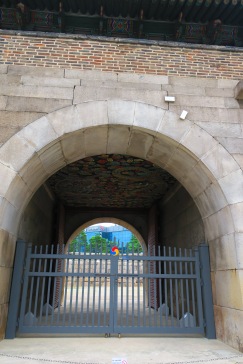 The area is known for its huge shopping malls and markets. We enjoyed passing through a few of the outdoor ones. In Japan, markets are always very tidy. In Seoul, it was more raucous, with goods piled up on tables, on blankets on the ground and sometimes with big green umbrellas above. We didn’t buy anything but I’ve heard you can haggle, which is also a general Japanese no-no. The Cheonggyecheon river runs through this area and had pedestrian paths along its side. 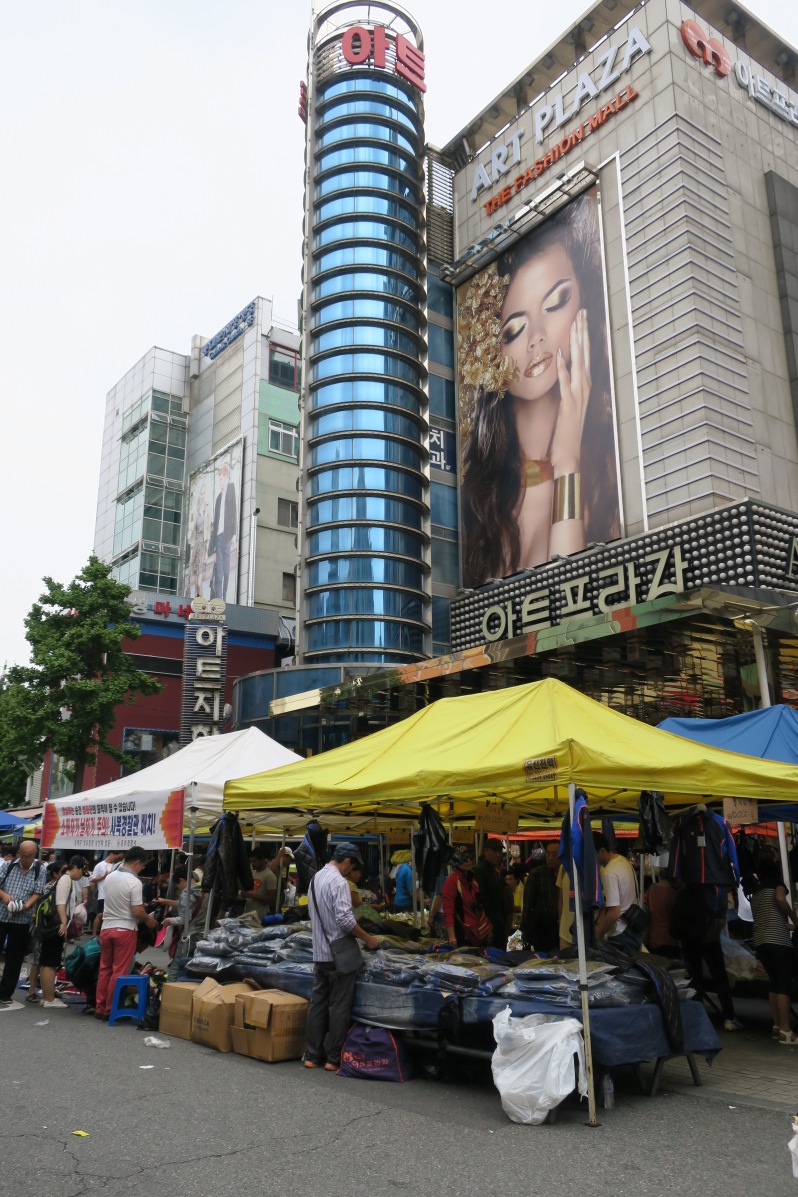 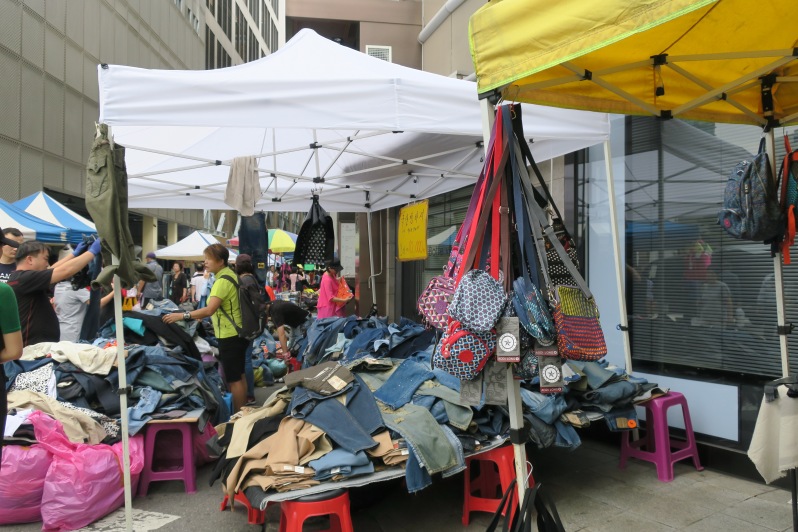 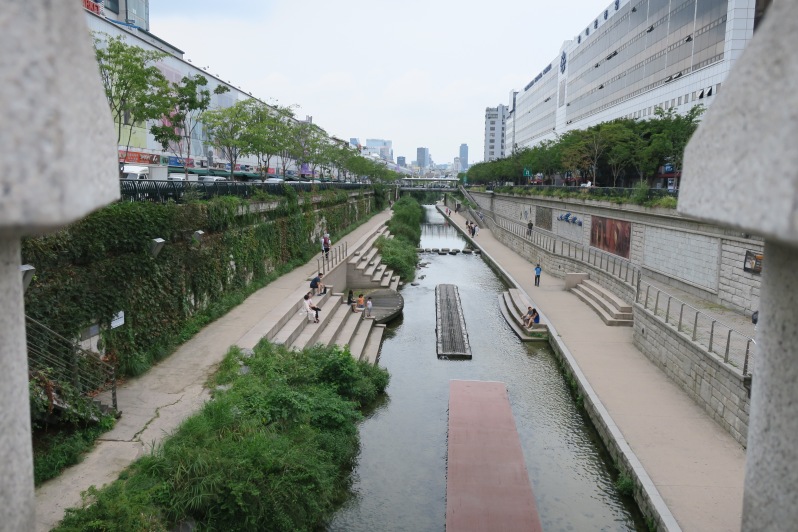 There are a lot of underground malls. I loved the drawings decorating the walls along the stairs leading down to one of them. 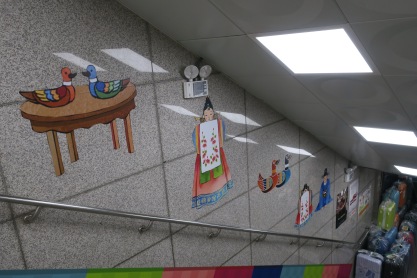 This area also has the Dongaemun Design Plaza, designed by the late architect Zaha Hadid.  It’s an odd, though pleasant, modern space, with lots of curvy walls reaching out from the convention and art center. 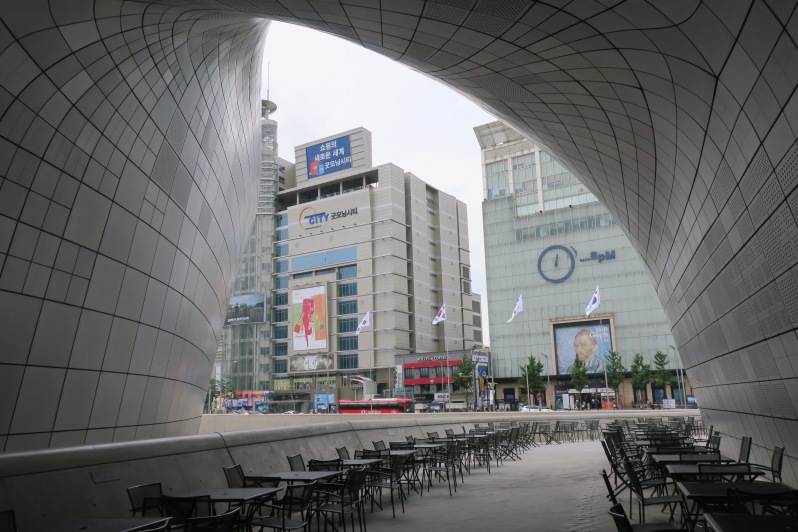 Next stop: Changgyeonggung Palace, one of five royal palaces in Seoul.  It was completed in 1483 although it was destroyed twice by the Japanese, first in the 1590s and again between 1910 and 1945, when Japan occupied Korea. It consists of large courtyards and an ornate series of buildings which would have served as quarters for the king, queen and their households. We really enjoyed wandering its grounds. 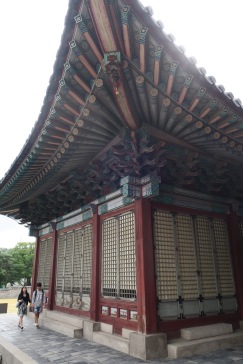 Now might have been a good time to stop and catch our breath, but nope, we opted for a 30-minute walk. Go, Liam, go! 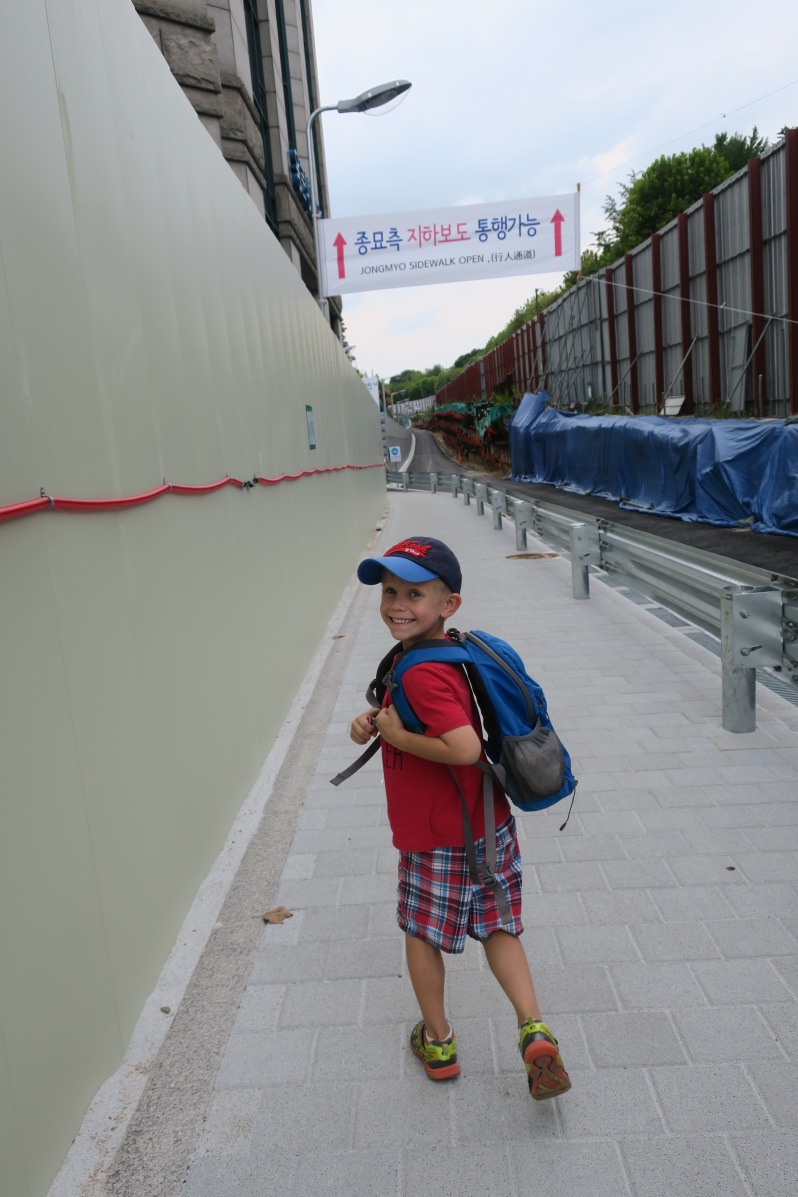 We were searching  for the tiny neighborhood of Bukchon Hanok Village, which consists of mainly private homes in a traditional Korean style. The wood houses feature tiled roofs and are grouped along small alleys. We didn’t have our usual smart phone internet access and were working off of a small guidebook map. Let’s just say that we found part of Bukchon, I think, but probably managed to miss the main neighborhood. Nevertheless, we admired the homes we did see, with a striking mix of shacks and ultra-modern renovations, even if they were or were not in the actual Bukchon area. 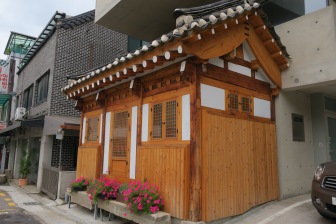 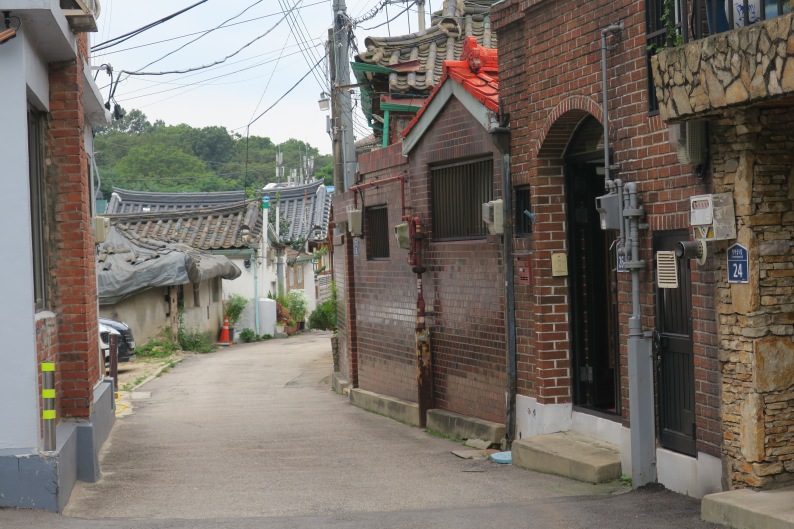 We stopped off at a 7-11 for beer, water and nibbles, and sat at tables and chairs on a make-shift patio. (We love our Japanese 7-11s, but they  never have places to eat, unlike many of the Korean ones we passed.) On the way, we passed this Confucius statue store, which tickled me immensely.

While we waited at the bus stop, I snapped a few pictures of women and men in traditional Korean dress. So many women were wearing hanbok dresses — high-waisted gowns with very full skirts in vivid colors — as they toured the palace and surrounding areas. If you wear traditional dress, you are given free admission. I used the zoom lens to take pictures of two men across the street while they consulted a map. All well and good, until Liam decided to start waving and shouting at them. 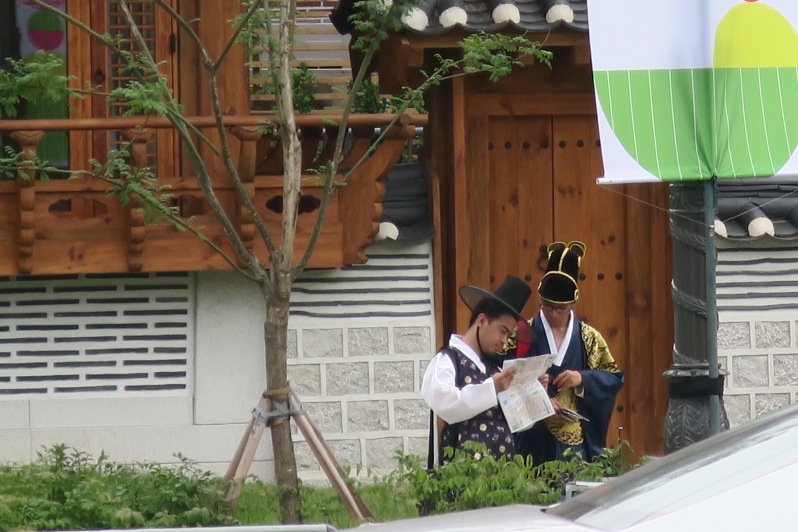 I snapped a few more pictures from the bus. I probably should have been paying better attention. We missed our planned stop. But at least the views on the way were nice. 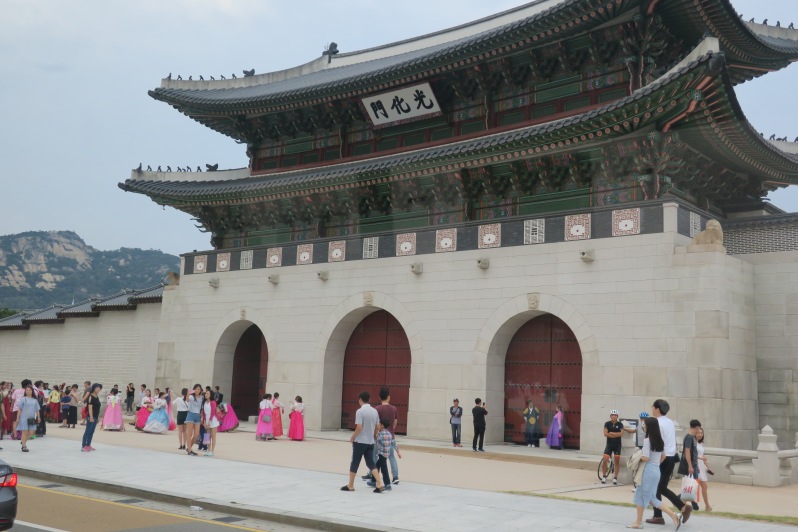 As we walked from Seoul Station, not our intended stop, back to Namdaemun Market, where we meant to be, we passed the Sungnyemun Gate of Hanyangdoseong. I love seeing how ancient structures are integrated into modern cities.

Our final adventure of day one was wandering through the stalls and stores of the Namdeamun Market as night fell. 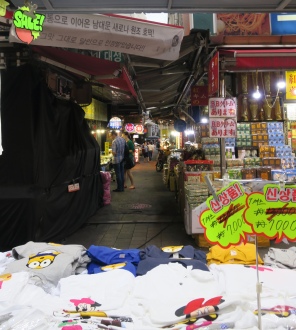 I say final adventure, but after that we struggled to find a restaurant for dinner. We settled on a Korean (food) restaurant and in our tired states of mind failed to note the fire pictures everywhere. Our meals (seafood noodle bowl for me, rice and meat and veg for Wil, untouched plate of dumplings for Liam) will not be forgotten anytime soon. I think my mouth and throat are still burning.

Before heading to the nearest subway station and figuring out how to get back to the hotel — the tour bus was done for the evening —  we took one last stroll in the dark through the market. Vendors were low-key, glancing up at us from their stools positioned next to their carts, or ignoring us entirely while they chatted with fellow marketers. I left my camera tucked into my purse and simply enjoyed — I sniffed fried fish cakes and waffles; I listened to tinny music wafting out from open doorways; and I scanned the piles of leggings, knock-off purses, key chains, stuffed animals and luggage. We left empty-handed but definitely not empty.

I’ll post another day about Day 2 of our Seoul, Korea mini-tour.