What happens when you ask a group of Japanese ladies to host a New Year’s luncheon for a group of American ladies?

Beautiful stuff happens, that’s what. And I’m not just talking about the camaraderie and the fun that comes when women generously share their culture with foreigners, although there was plenty of that in evidence today. I’m really talking about beauty: Beautiful food. Beautiful dancing. Beautiful decorations.

Beauty is a theme I will return to again and again in this blog. I can’t help it. The Japanese are just so darn good at creating beautiful experiences and beautiful things. Today’s lunch – which was a gathering of all the smaller culture groups within my base spouses’ group – was overloaded with loveliness because we came together to celebrate the passing of one year into the next. But, honestly, I’m almost unable to get through a single day here without viewing something exquisite created by Japanese hands.

For today’s event, let’s talk food first. Our group of ladies outdid themselves with the meal. No ordinary plates at our table: Our places were set with lidded bento boxes with decorative placemats on top, as well as our Japanese name tags: 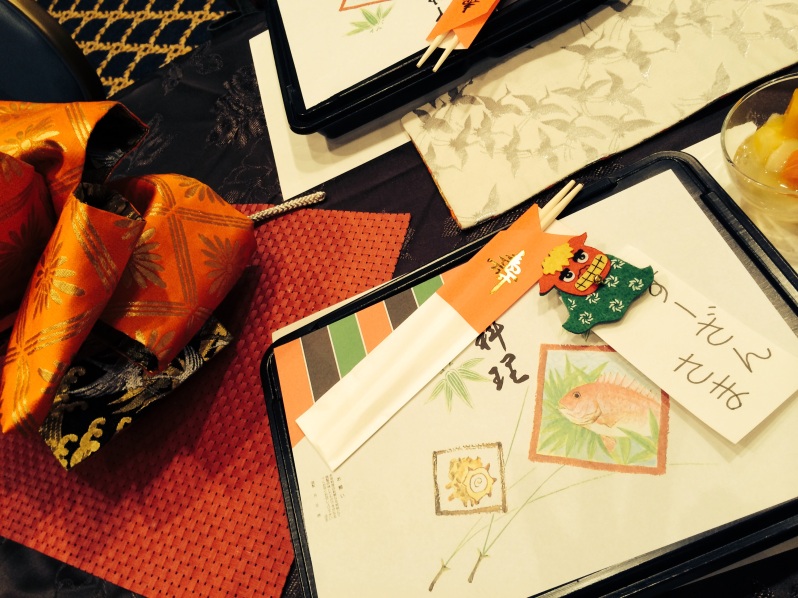 Those boxes needed to be filled and that meant a buffet table brimming with sweet and savory delights: 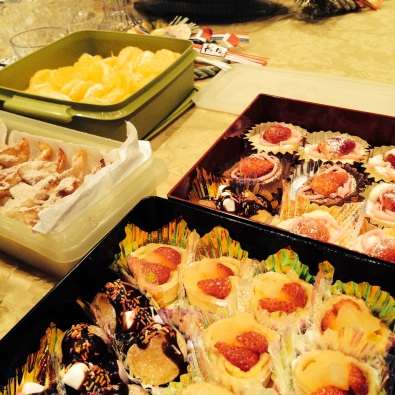 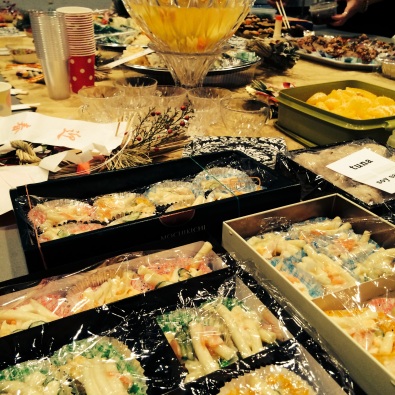 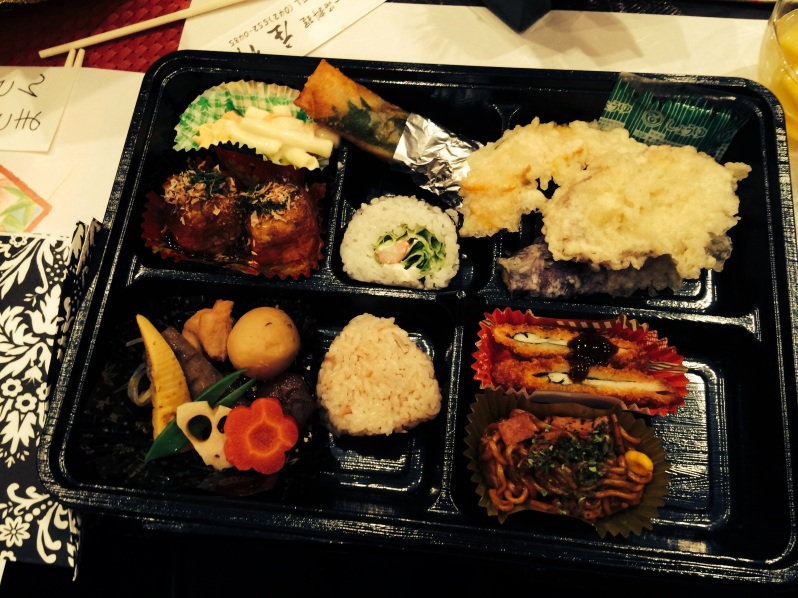 The care that went into creating the presentation of the food astounds me. So many little paper dishes, with just the right amount of food served inside. One set of my noodles had somehow been wrapped into a little knot; one little vegetable became a flower. Osechi-ryori — these artful arrangements of a wide sampling of food — is a Japanese tradition at New Year’s, usually eaten at home. I’m happy to report the food tasted just as good as it looked, if not better.

Next, enjoy with me a little of the entertainment. (Forgive me if the photos aren’t super crisp. I failed to bring my camera today so these were shot with my iPhone.) Dancers in kimonos calmly and gracefully pattered across the stage. A singer belted out a song while his partner danced with a hat (a bowl?) and a sword. A tiny, elderly woman dressed in a golden shower cap and robe, deftly tossed two large sticks in time with music while she sat cross-legged on the stage. 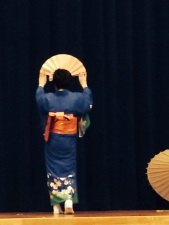 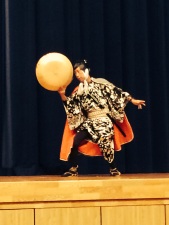 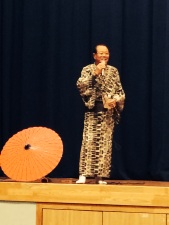 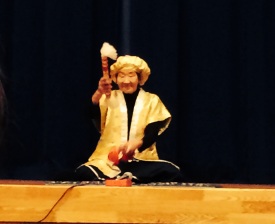 A group of women, later joined by a man, demonstrated incredible skill snapping what appeared to be small mats out into longer shapes while they danced. They even created tableaux of scenes including Tokyo Tower and Mickey — then Minnie — Mouse. 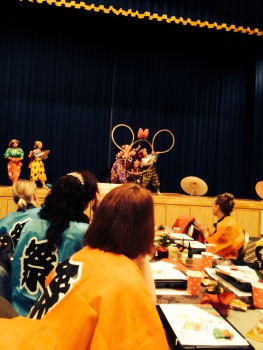 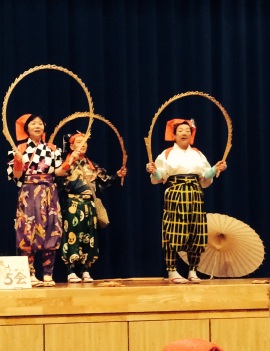 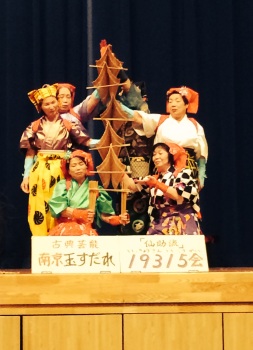 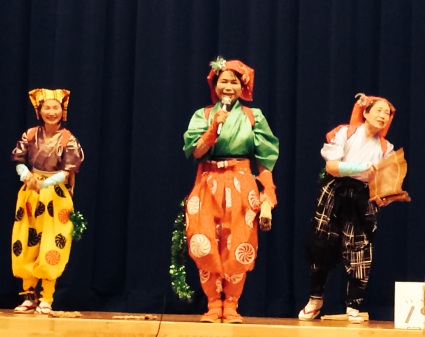 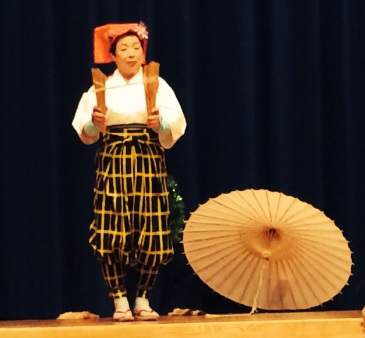 Okay. Some of it was maybe a little more weird than beautiful to my American eyes, but I love the idea of these performers carrying on traditions that generations of Japanese have watched and loved. It’s one of the things I appreciate about living outside of the United States. We’re an adolescent nation: We haven’t had centuries to polish and perfect our art and culture. In Europe, and now Asia, it’s fascinating to see how ancient arts are integrated into modern life.

And finally, let’s talk decorations. Here’s what some of the other groups’ dining tables looked like: 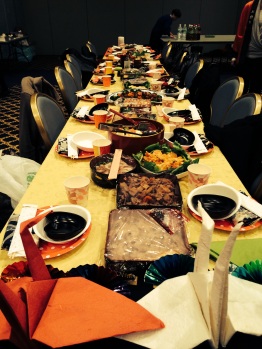 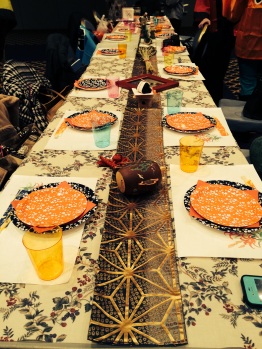 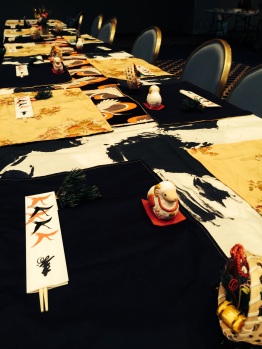 Our own table was richly decorated with ornate fabric runners and traditional New Year’s decorations. At the end of the party, we Americans were given no choice but to take home these beautiful things. Our Japanese hostesses are incredibly generous and were so excited to send us out the door staggering under the weight of our (refilled) bento boxes and numerous decorations. My home is now a little lovelier thanks to these items.

My buffet is now graced by a pair of kadomatsu. (They’re usually placed in front of homes, on either side of the door.) I’ve seen several explanations for their composition: the three bamboo shoots represent heaven, humanity and earth; the bamboo is a symbol of honesty and the pine means new life; or the bamboo symbolizes strength and the pine is for long life. (As is often the case here, I didn’t know what I was taking home. After doing research for this blog, I now understand why Junko was so insistent that I take two with me.) 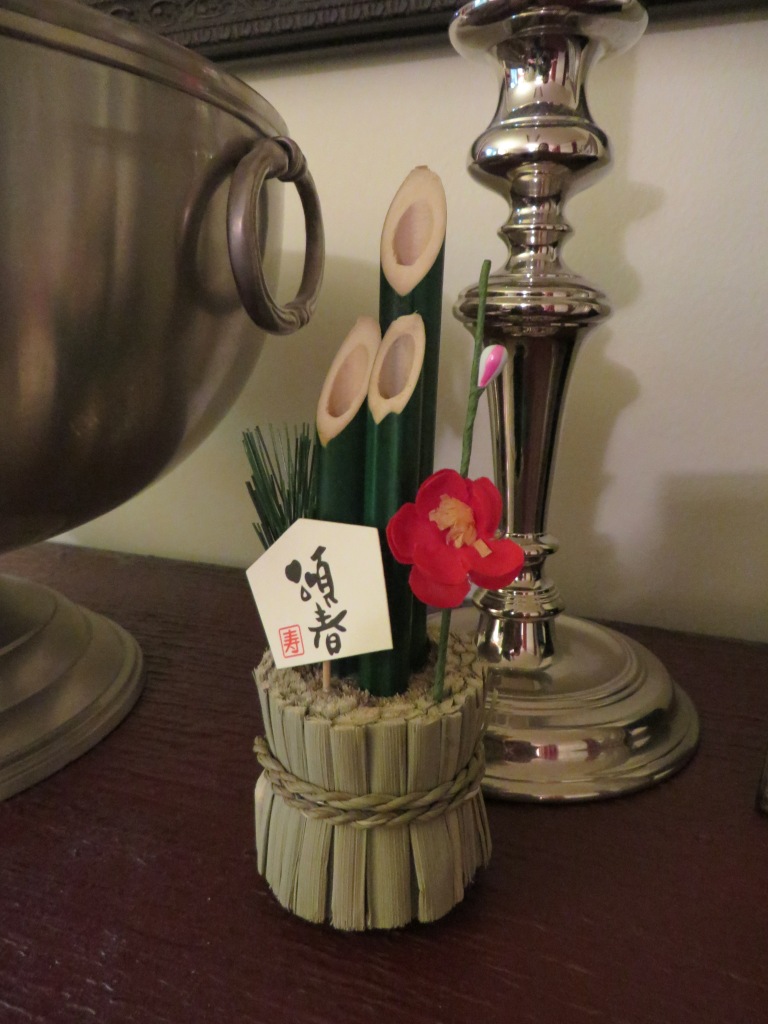 I also came home with several shimekazari, door decorations that are incredibly popular here. They’re designed to ward off evil spirits. (The chopsticks in my photos are only to offer scale.) 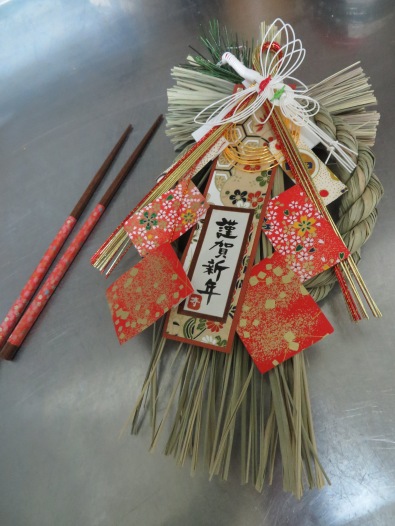 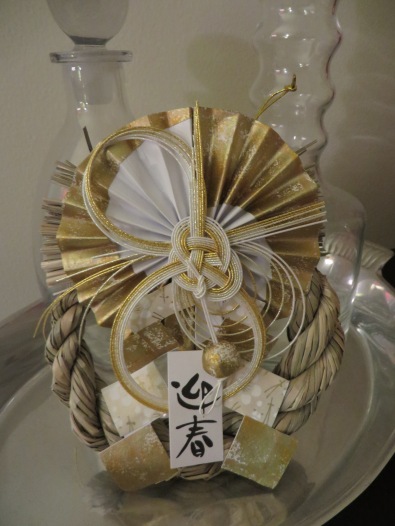 I don’t know what this is, but it’s lovely: 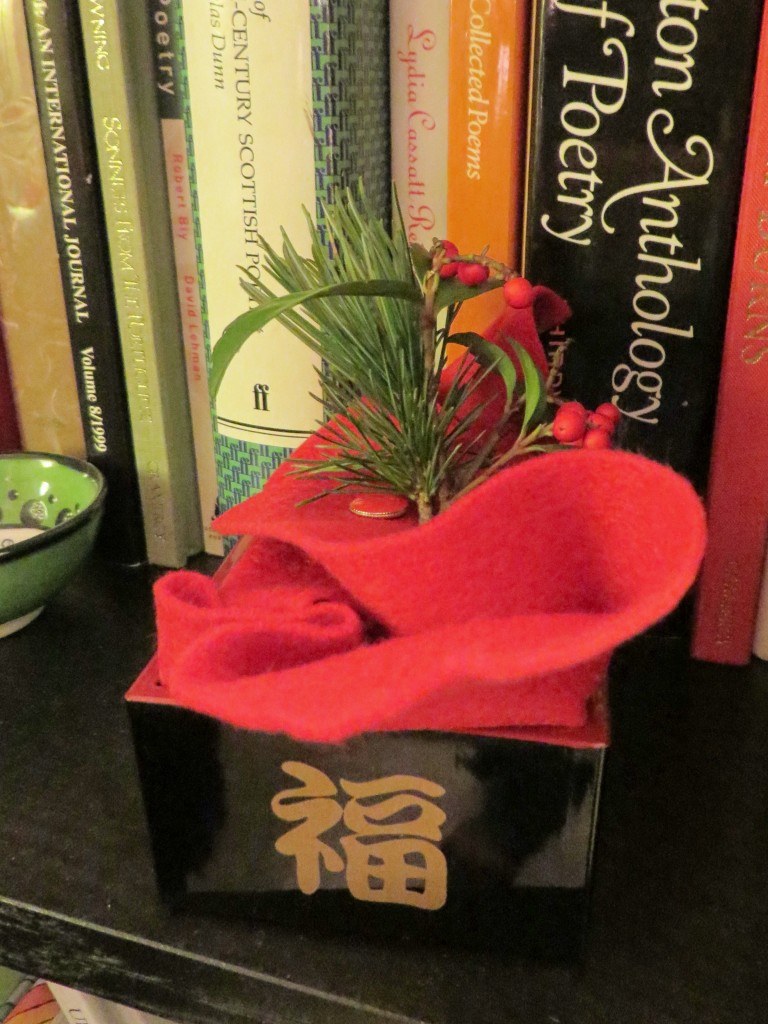 I’m not quite sure what this is either, but it’s made of paper and my Japanese friends showed me that it spins. It spins! How cool is that? 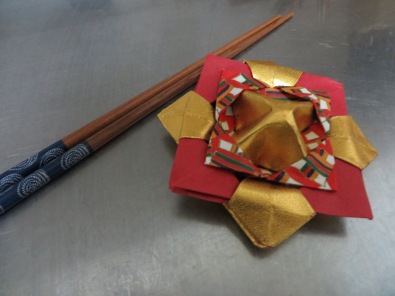 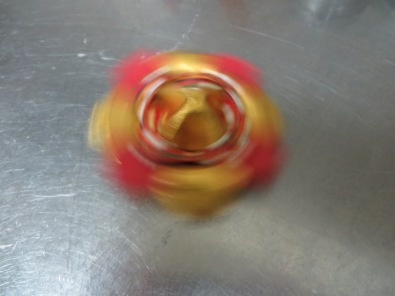 Lastly, just because I think it’s so cute, here’s a closer look at my dragon name tag. It says “Sama Su-Zan,” or roughly translated: “Mrs. Susan.” Even my name becomes more beautiful when crafted by the Japanese. 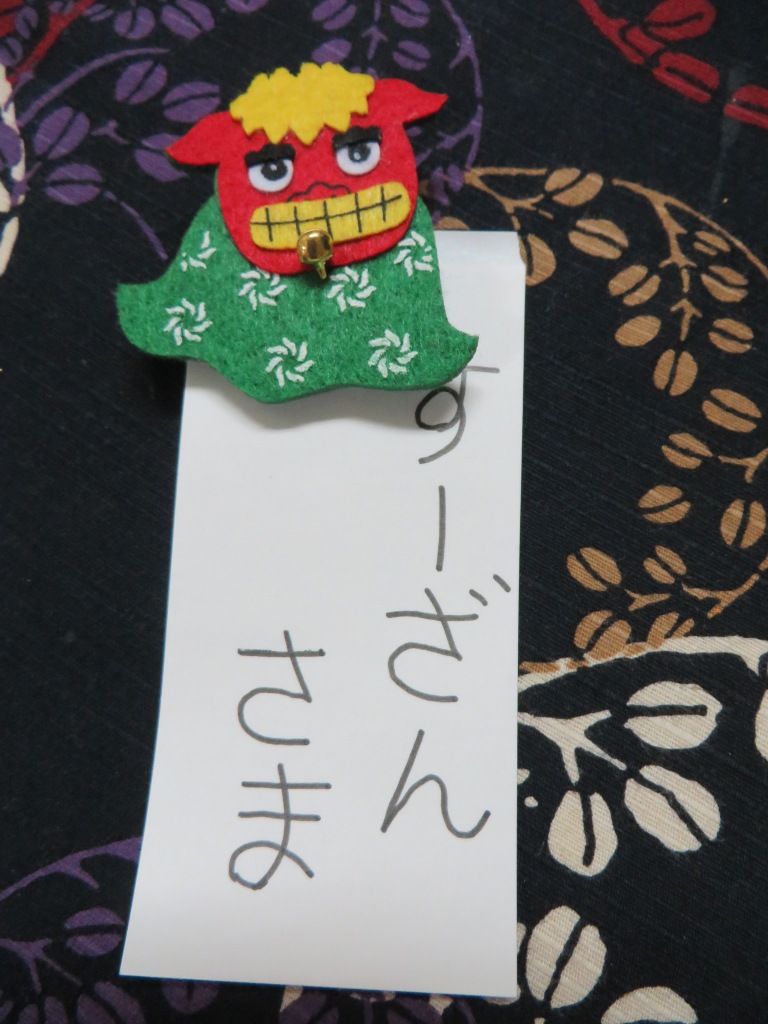