Meiji is a pervasive brand here in Japan. They make chocolates, snacks, yogurt drinks, cookies and hot chocolate, among other things. Basically, they make yummy treats.  This week, I joined a group of friends on a tour of the Meiji chocolate factory in Saitama, here in Tokyo. A friend of a friend organized the rental of a bus so a large group of us from the base could go to take the free tour of the factory. It was a really “sweet” to get to see where some of these delicious items are made.

We started our tour in a meeting room, where we were handed a few brochures in Japanese and samples of delightful little strawberry and milk chocolate candies and boxes of a grape-flavored yogurt drink.  Our Japanese guide blithely launched into her presentation in Japanese to our room full of mostly gaijin, who all nodded politely as if we could understand anything she was saying besides “Meiji” and “cocoa.” After a minute or so, one of the Japanese members of our group took pity, stepped forward apologetically, and politely offered to translate. Much better. The rest of the (translated) presentation and a video in English introduced us to the process behind making milk chocolate bars and a snack called Carl. Carl — that’s how they translated the name, I swear — is a lightweight cheese or curry-flavor puff. (I believe it’s more properly called ‘Kaaru.’)

The whole Meiji gang is here!

Even the elevator was decorated.

After a brief introduction to the history of chocolate, our tour consisted of two hallways. First, the sweet. The chocolate hallway was papered on one wall with foil, while the other wall was painted a rich chocolate brown. Through observation windows, we observed the final steps of producing the classic Meiji chocolate bar. We saw chocolate get pressed into molds, inspected by hand, and folded into foil. We also watched as Meiji twinkle chocolate eggs were sorted by robot into sets according to their foil wrappers.  The adorable tiny eggs include tiny candies hidden inside.

Downstairs, things got salty. The hallway’s walls and ceiling were a cheery, sky blue. The concrete floor was painted green with a narrow, meandering tan path. Above us, light fixtures shaped like chunky clouds floated. We watched as Carl was snipped, heated and dried in various pieces of spotlessly-clean machinery. Near the end of the hallway, we stopped in front of a window where there was a large mechanical robot arm. Our guide pressed a button and the arm sprang into action. It pivoted, picked up a plastic bowl, and extended it under a stream of falling Carl. The robot decided there was too much, so it tipped the bowl and dumped a few out. Then, it pivoted back toward us and with a grand gesture, circled first to the left, then to the right, offering us visitors a clear view of our treat. Then it deposited the bowl on a shelf, and our guide was able to reach in and grab it. The puffs — I had several! — were light as air and gently seasoned with cheese. Two bites and I understood why this product is sold in massive quantities here. 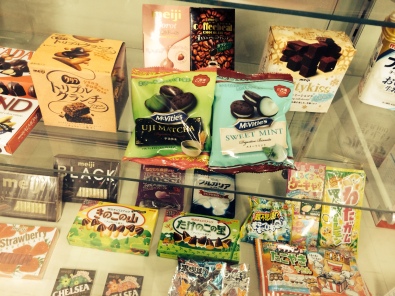 A selection of Meiji treats…

Later, we all received our very own bag of Carl. More mechanical fun! The guide slid open a clear window in the wall. Just beyond, a conveyer belt was carrying a row of Carl bags. Each of us got to hit a yellow button and a puff of air blew a snack bag down a short ramp into our waiting hands. The bag felt warm from the freshly baked Carl.

We were an appreciative audience, “oohing” and ‘awwwing” with abandon, which greatly pleased our guide. One last experience awaited us. The hallway ended with a small, make-shift shrine, complete with a red Tori gate on the end wall fronted by a tiny altar, where two special bags of Carl sat. Our guide, translated, explained that this is a special time for many high school students now, who are taking their entrance exams for college. These bags add a pun: “Oh-ka-ru” to change the snack name into the name of the exam.

She encouraged us all to say a special prayer with her, the same that hopeful students make. She taught us how to say the prayer in Japanese, followed by two swift claps. We complied and were rewarded with a voice reverberating from the altar, informing us, in Japanese, that we will pass the test. (Boy, am I relieved.)

The factory workers were all clad in white uniforms from head to toe, complete with hair caps and face masks. The women wore white and pastel pink and the men wore white and pastel blue. Some ignored us as we stared at them through the observation windows. Others looked up and waved merrily. One worker especially wished us well as we walked back down the hallway after finishing our tour: She raised both her hands and waggled them enthusiastically.

The two guides that helped our group were also cheery. They waited outside as we boarded our bus and were still waving at us as the bus drove down the street away from the factory. It was a sweet farewell to a sweet place.

Interested in visiting Meiji? This blog is now available on GPSMyCity, with an interactive GPS map for your iPhone to make your visit easier. Please visit Sweet and Salty: A Visit to the Meiji Chocolate Factory. (To make a reservation, you can call 049-283-1398.)