This year, St. Valentine met Mt. Fuji for our holiday when we took a day trip to Fujiten Snow Resort. I’m a lucky girl: I spent my Valentine’s Day playing in the snow with my two loves.

Since moving to Japan six months ago, we’ve done most of our exploring by train. Japan’s rail system is extensive and efficient, so that hasn’t held us back much. But, to get to most of the sites near Mt. Fuji, which is roughly 60 miles away, you really need to drive. (Or take a tour bus, which was our mode of transport the first time back in October.) Yesterday morning, I navigated, Wil drove and Liam provided commentary for the 75 minutes it took to get us there. Just as with the train system, the highways here come equipped with plenty of English signage to ease the path, although the true guide was Google Maps plotting every inch of our route.

Fujiten resort sits at the base of Mt. Fuji. Here’s the view from the parking lot:

It’s a bit of a climb to get to the entrance:

As always happens when we go somewhere new in Japan, it took us a few minutes to get our bearings. The first building we entered was home to a ski shop, the toilets and a convenient store. Passing through, we stepped out into the resort, where hundreds of bundled Japanese were lugging their skis, plastic sleds and snow boards. The first ticket line had prices about three times as much as I was expecting to pay. We just wanted to sled: We didn’t need tickets for the runs for skiing or boarding. Walking on, we eventually found the entrance to the kids’ sledding area where the modest price matched our expectations. We rented two blue plastic sleds and passed through the gate to join other families with little ones.

Now the fun could begin: A gently sloping hillside gave kids and their parents the perfect space to gain some speed. We didn’t even have to climb the hill: A single-file conveyer belt ferries sledders up the hill. (That’s the line of people you see in the photo below.) At the top, you can turn left or right for either a faster or slower slide down. Back at the bottom of the hill, large snow drifts keep you from crashing into the non-sledders gathered there. 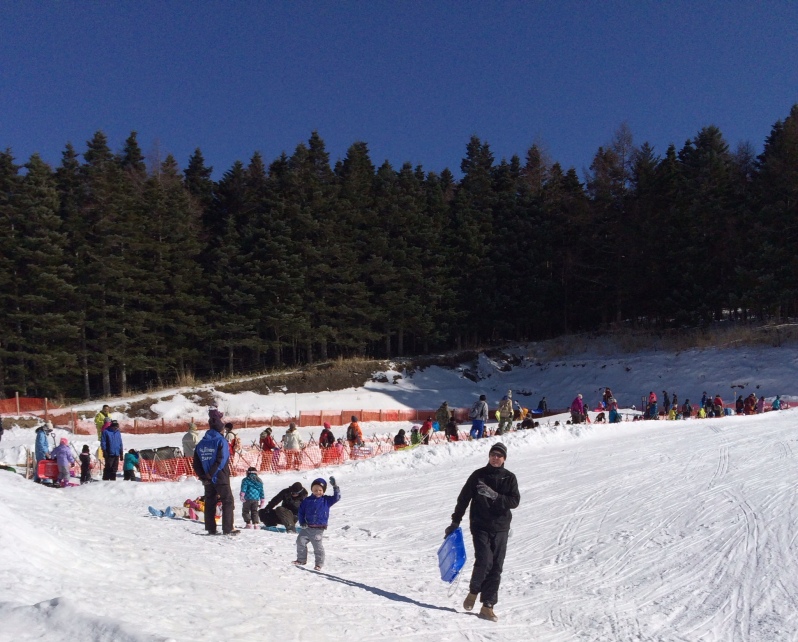 Time for giggles: We positioned Liam on his sled, tucked his feet in and sent him down the hill, where he promptly crashed into another kid. Smiles all around, so no harm done. Next, Wil sailed down the hill and promptly got yelled at by one of the blue-coated staff members. We still don’t know why. My turn next: I howled happily as my sled rushed down the hill. It’s a feeling I haven’t had for a long time: The last time I sat on a sled I was in high school.

We were in a sea of Japanese faces but, as luck would have it, after an hour or so the first Westerners we spotted recognized us. They were another family from the base, taking advantage of the sunny day. Later, Liam and their daughter had fun playing together, building a snow fort and running through the snow.

Liam loved sliding down the hill alone, although Wil finally convinced him to share a sled. I stayed at the bottom and performed my role as family historian. Liam loved the speed he gained with his father weighing the sled down. Watching Liam’s grin as he came down the hill and listening to him cackle with glee as they crashed into the snow barrier at the bottom was the highlight of my day. 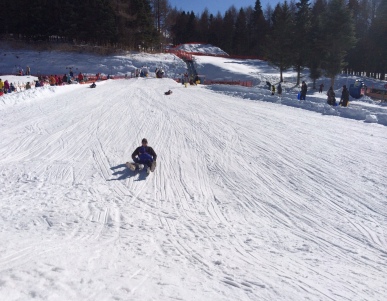 The resort had a number of food vendors selling Japanese treats like meat and seafood grilled on a stick or steaming bowls of noodles. We also checked out the packed cafeteria-style restaurant but decided an hour wait for mystery food followed by a potentially unfruitful search for a table at the end wasn’t worth it. Instead, we purchased Japanese snacks to supplement the ones we brought with us and picnicked in our car. Wil and I warmed up with cans of hot coffee I purchased from a vending machine.

We see funny signs here all the time, most of which I don’t get the chance to photograph, but this one in the stall in the bathroom was too good to resist. Wil wondered why it was written in English.

We spent the rest of our afternoon taking runs down the hill and watching and helping Liam build a mini-snow fort. I know our friends in the U.S. have spent the winter buried by snow, but here in Tokyo we’ve barely seen any. Liam was ecstatic to get to spend an entire day frolicking in the stuff. We grown-ups had fun, too. I’m from Ohio, so snow isn’t exactly a novelty for me, but playing in a big field where I can look up to see Mt. Fuji is not exactly typical. 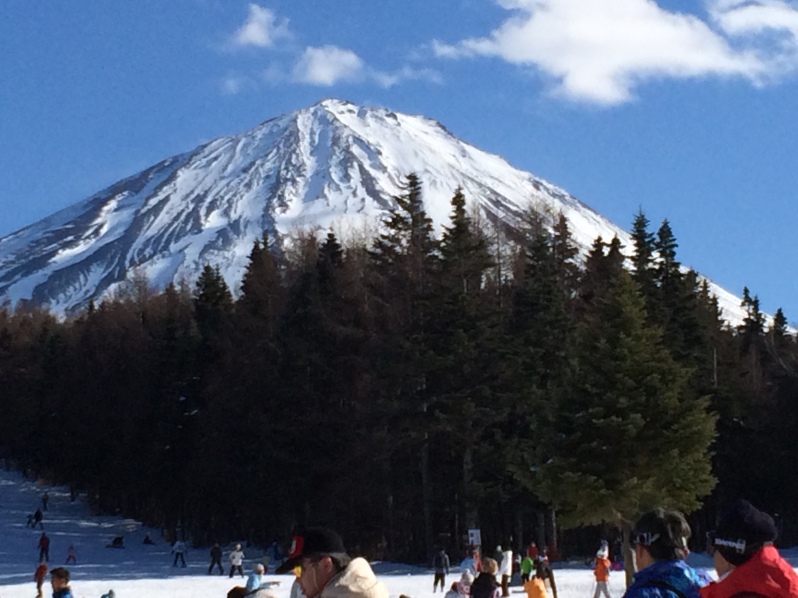 It wouldn’t be a proper day out in Japan without at least one selfie. Here’s our little family, photo bombed by Mt. Fuji himself: