The path was slick, packed with three to five inches of snow, frosted by a layer of ice. Wil held Liam’s hand, keeping him on the inner edge of the hill, and I trudged behind them. Snowfall had deposited a crisp layer of white on the mountain side, a thick blanket draped beneath the forest of upright pine trees. The air was cool, but not sharp. We walked in silence although my heart kept up a steady banging in my chest, clanging louder every time I stupidly glanced sideways at the slope beside us.

For many people, hiking the rustic mile-long path to where the snow monkeys live is part of the fun. For me? More of a challenge. I’m inclined to agree with the people who named this area Jigokudani Yaen-koen, or Hell’s Valley, because it is home to hot mountain springs and steep cliffs. The monkeys were great but the walk there made me very, very nervous.

The path wasn’t dangerous. It was wide enough for two people to walk abreast. Middle-aged, overweight American women were shuffling along it. Small kids, even smaller than Liam, were traipsing along it. A few silly Japanese teen-agers did it in heels. But still, it was beyond my usual comfort zone. I’m leery of heights. Plummeting off of a mountain-side in Nagano, Japan, is not on my bucket list here. 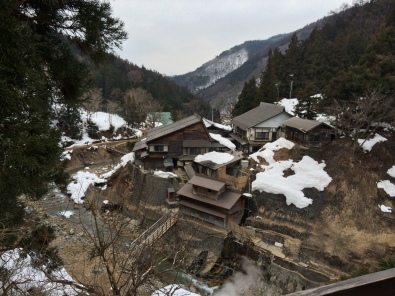 Looking down on a traditional ryoken, Japanese hotel.

The path did afford us some lovely views.
We Americans like to call them “snow monkeys” but more properly, they are Japanese Macaques. They congregate in the Yokuyu river valley and relax in hot springs. You’ve probably heard of them. They are the wild monkeys that aren’t afraid of the tourists who come to visit them each winter. We were warned by our tour guide, forcefully, to follow a few rules. One: Don’t touch them because they will bite and scratch. Two: Don’t bring any food with us. Three: Don’t stare directly into their eyes unless you feel like issuing them a challenge. (See Rule One for why that’s a bad idea.) Otherwise, we weren’t restricted in any way.

That means, folks, no enclosure. Just us and the monkeys with nothing between us. (Plus a lot of other people: It’s not exactly a private, unvisited, wilderness.)

Remember that little issue I have with fear? Yup. Wild animals tend to make me nervous, too. Especially ones that are scampering around near my feet or over my head. See this photo below? My posture is poor here because I’m a little freaked.  I know that monkey is back there and even though they aren’t known for jumping on people, a little part of my brain is saying, on repeat: “What if it jumps on me? What if it jumps on me?” 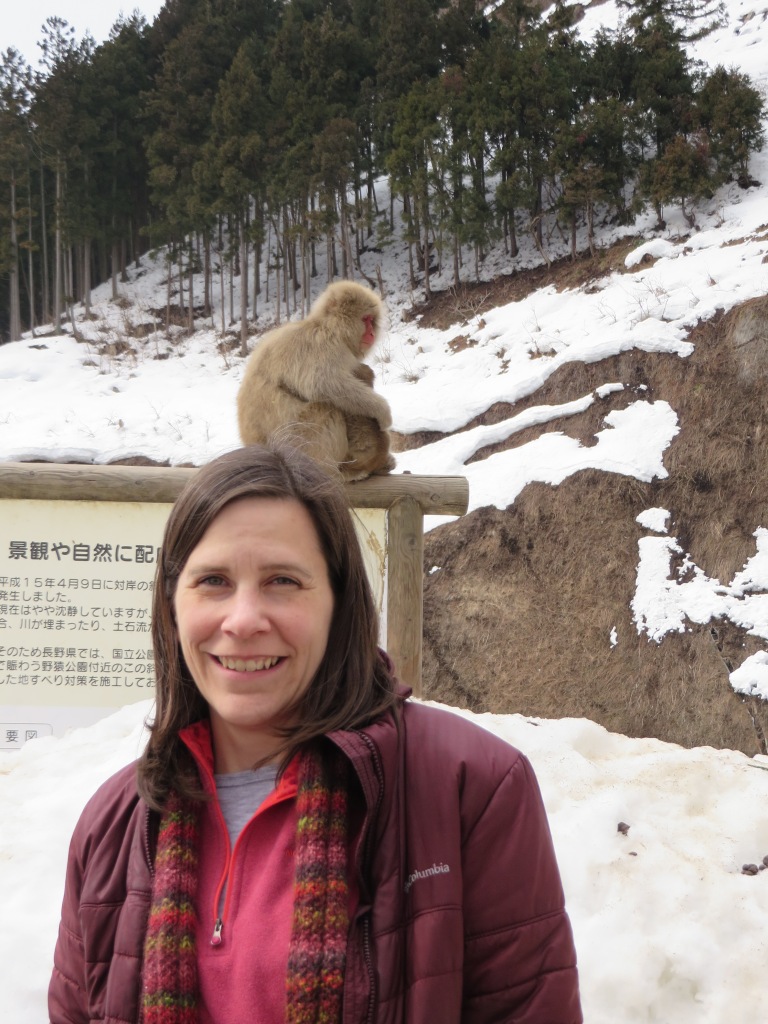 It didn’t. None of the monkeys jumped on any human on Saturday. They did a lot of jumping. On each other. On boulders. On the mountain side. But not on me. Or Wil. Or Liam. (Thank God!) 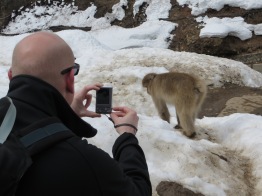 Okay. So past the fear, how was it? Awesome! They’re beautiful creatures and I couldn’t help but feel in awe of them. Those faces are so like our own, it’s almost unnerving. 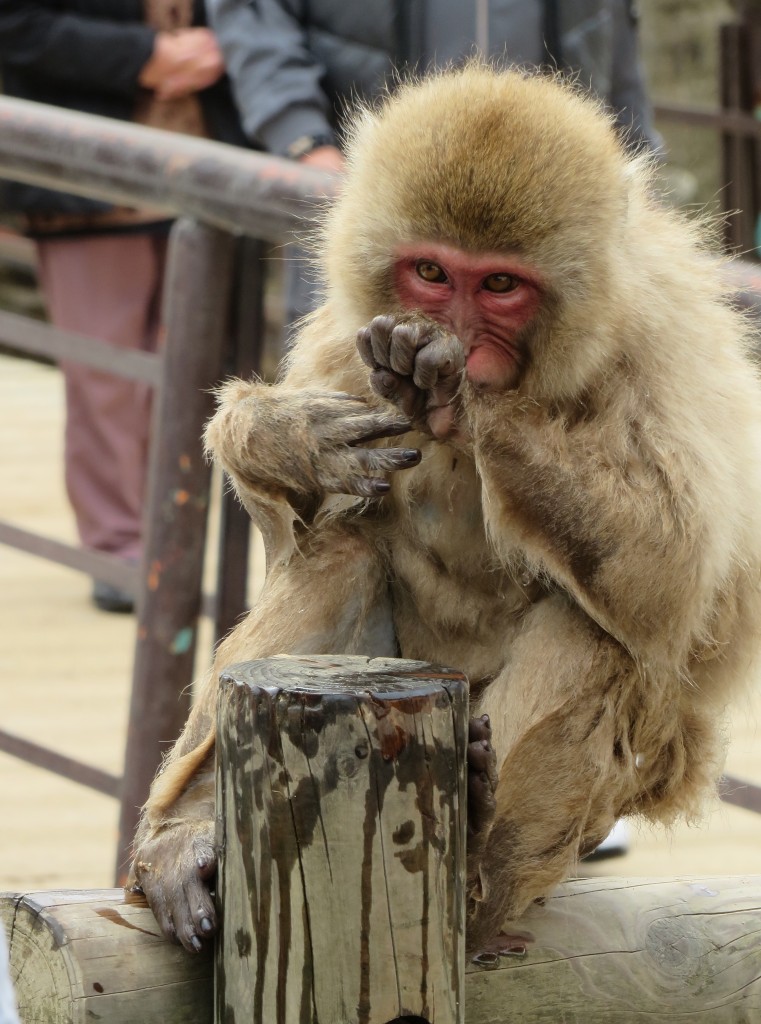 I stood just a foot away from several mommy monkeys as they cuddled their baby monkeys. 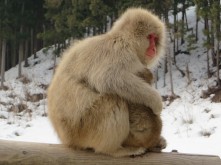 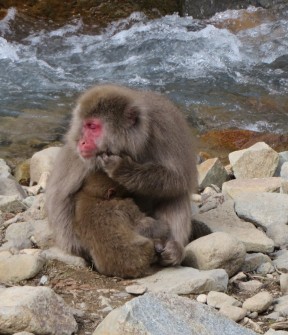 Two other monkeys curled up around each other and spooned, each closing their eyes in oblivion to the humans a step away, snapping pictures of their nap. We saw several sets of sleepers. 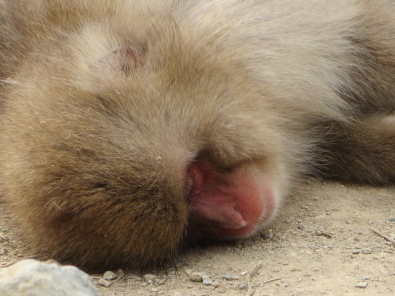 We knelt down and watched the monkeys as they swam and lounged in their hot pool onsen. 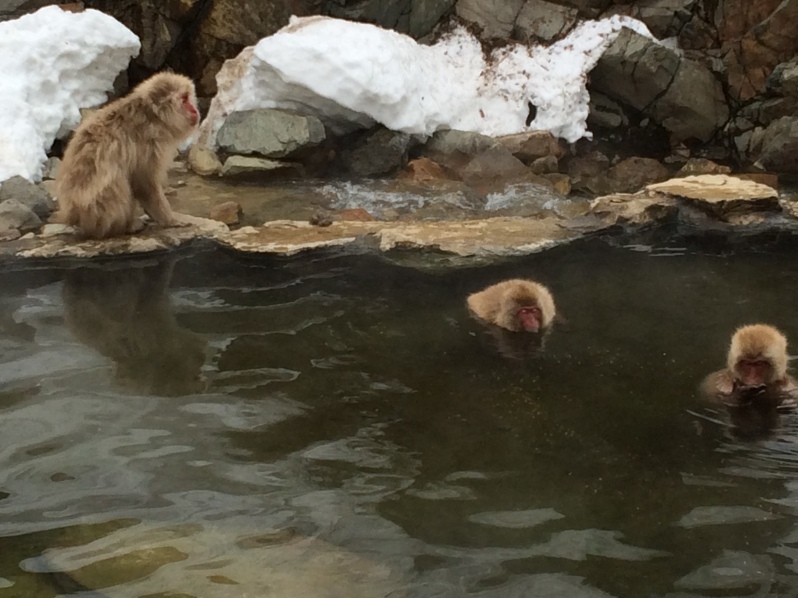 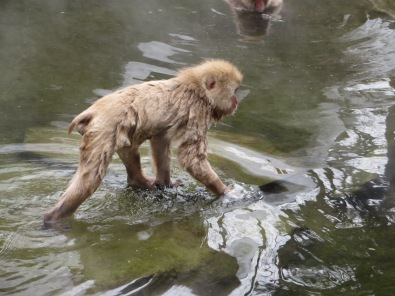 Liam was enthralled. We call him “Monkey” quite a bit, so one could say, he was in his element. What 5-year-old kid wouldn’t love to spend nearly two hours in the company of monkeys? 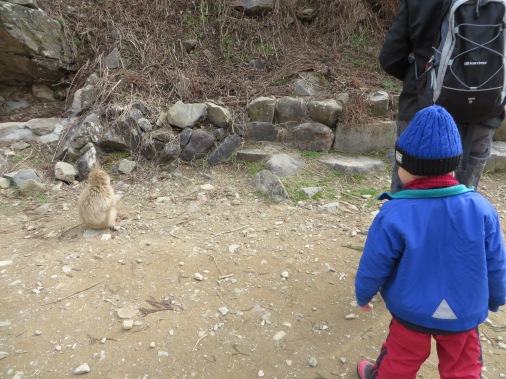 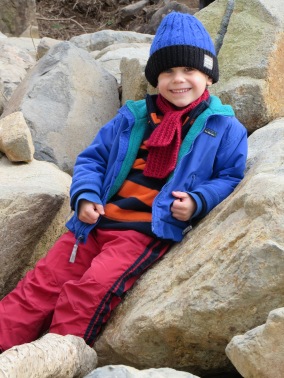 His dad was pretty psyched as well. We both took insane amounts of photos and marveled not only at the beautiful monkeys but at the landscape where they live. 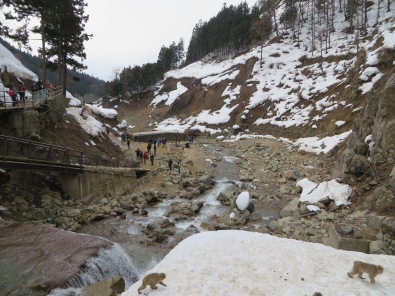 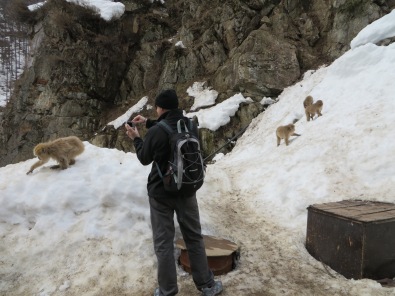 Ah, yes, the landscape. Knowing I’d be taking my baby steps and that we have our kid in tow, we left a little early for the walk back along the snowy path. We didn’t relish the idea of missing our tour bus for the three-hour drive back to Tokyo. I took a deep breath and off we went. You know the good thing about facing your fears? Once you’ve done it, it gets easier. On the walk back, instead of watching my feet so much and gulping every time I looked down the steep hillside, I relaxed. I basked in my new status as the kind of woman who hangs out with snow monkeys and hikes a mountain in the winter. My heart was quieter, and happier, for our return trip.